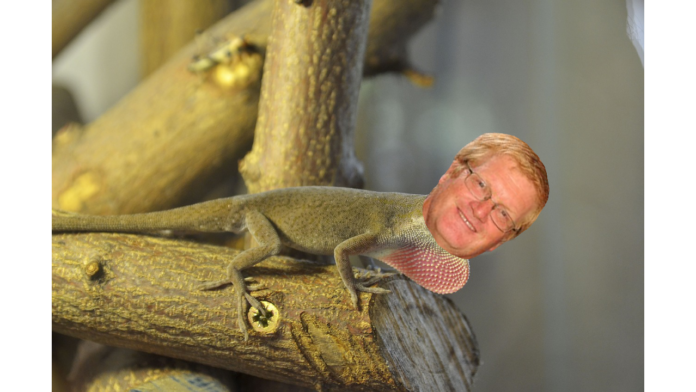 There’s more than one pandemic hitting JD this week— what’s being called “lizard-fever” has broken out among AP Bio students in response to their latest online learning experience: the Lizard Evolution Virtual Lab. This lab was assigned to the students during what once was spring break with the apparent intent to drill the one key skill of biology: measuring lizards.

AP Bio student Neel Patel detailed his experience with the lab to yampage. “I must’ve measured at least a hundred lizards.” His remarks mirrored those of other students who described similar ordeals. But the question remained, why?

As teacher Keith Comfort explains, “Measuring lizard hindlimb lengths is a crucial skill for anyone who wants to have a shot in the biology world.” Despite the unusual circumstances, Comfort has insisted that this imperative lab must go on. He added, “Biology doesn’t stop for a pandemic. It’s cutthroat out there. I just want to give these kids a chance.”

But students have not been taking well to Comfort’s tough love.

“I am by no means equipped for this,” said a weary Claire Macero. “I’ve never measured so many reptiles in my entire life. It’s exhausting.”

A crazed Mena Coles-Carruthers told yampage “I eat lizards. I sleep lizards. I breathe lizards. I am lizards.” From there, she was sent to virtual counseling in hopes that she could be rescued from her state of lizard-mania.

After seeing several cases similar to that of Coles-Carruthers, the school psychologist explained that she believed social distancing was exacerbating the lizard craze. “These kids are trapped at home with nowhere to go, so the lizards take over their lives. It’s lizards, lizards, and more lizards – they just can’t escape.”

Despite the counseling staff’s best effort, it seems there is still no cure in sight for lizard-fever.

Others, however, seem to have developed some form of immunity.

One such student is Shamus Endries, who claimed to have completed the lab with ease, even going as far as to say that it was “fun.” Astounded and intrigued by this wild claim, we decided to do some further investigation. “Well, for years, my pet lizard was the most important thing in my life,” revealed Endries in a digital interview. We ended the interview there.

When questioned, Nate Rindfuss said, “We have a lab?”

Although lizard-fever is not affecting all AP Bio students equally, data has indicated significant decreases in the overall sanity of the class, which is alarming considering the meager levels they had to begin with.

Despite the adversity, Comfort maintains that this will go on until every lizard is measured. “This is AP Bio,” Comfort said. “We don’t mess around.”

Jimothy Rivers - November 19, 2021 0
CodeRainbowTrout just doesn’t have the same ring to it.