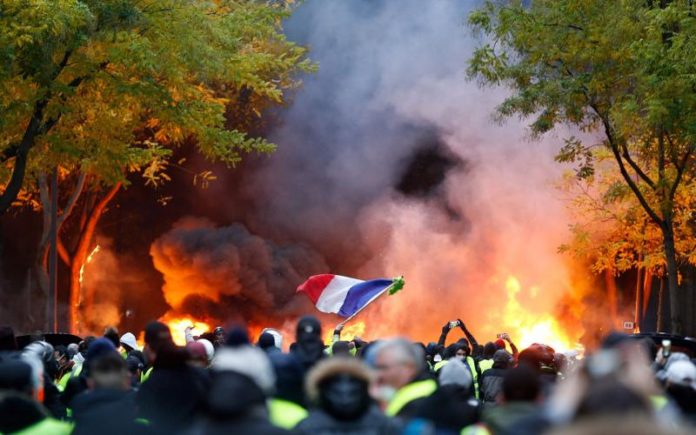 The city of love and lights? More like the city of disorder and chaos. Paris, and France as a whole are currently undergoing a period of political and civil unrest. The country is being rocked by violent protests that are beginning to turn deadly. Coupled with the terrorist attack in Strasbourg on Dec. 11, France is now in a three month long state of emergency. These protests are happening for various reasons, but there is one group behind them, Les Gilets Jaunes (The Yellow Vests).


The movement has now gotten completely out of control as hundreds of thousands of people are smashing monuments, fighting with police and rioting across the country.

“The increase in taxes is the cause of the protests in France. The French wish to increase the SMIC(The minimum wage in France is called salaire minimum de croissance),” said Adam Solomon, a highschool student living in Paris. The “yellow vest” movement began on Nov. 17 after a change.org petition protesting rising gas prices and taxes caught the attention of thousand of French citizens. It then became a Facebook movement, and it is now in full swing protesting. “It’s gotten pretty radical, they’re burning cars and stuff which isn’t always beneficial to the process but at the same time, if they are struggling to make ends meet while working full times jobs, changes have to be made governmentally.” said Stephanie Rice, a current events teacher at Jamesville-DeWitt High School.

Since this movement started there have been ten citizen related deaths,  2841+ civilians injuries and 1000+ police injuries. As of Dec. 8, 2300 French citizens have been arrested. The movement has now gotten completely out of control as hundreds of thousands of people are smashing monuments, fighting with police and rioting across the country. However, the issue with this movement is that there is no exact clear motive, and no one is declared leader of the movement. This lack of coordination between the protestors suggests that there is not a clear end in site.

It is fair to assume that these protests will remain ongoing unless French President Emmanuel Macron caves in even further to provide the French people with fair pay and fair taxes.

Devastating Volcano Ravages Tonga and Causes Tsunamis Across the Globe