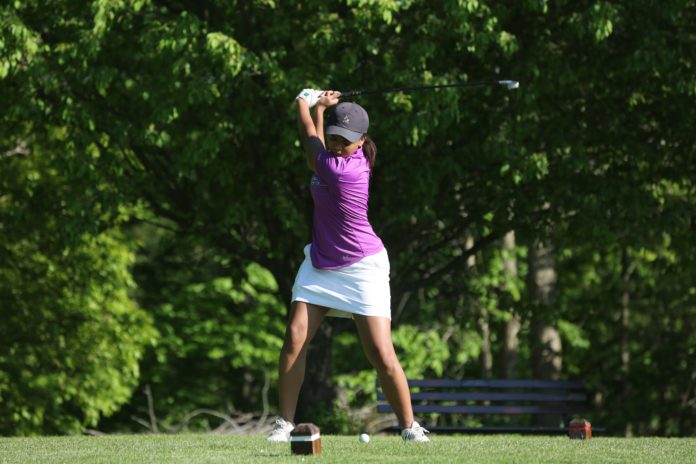 As the months of the 2018- 2019 school year are slowly dwindling away, the seniors begin to plan and set plans where they are going to end up next year. Their lives that they have lived and become accustomed to for the past 4 years are coming to a close and soon they will be moving onto a different path. Their time as Red Rams will be over but they always have their foundations and roots implanted here. For Jamesville Dewitt High school senior Lena Jones only bright things are ahead for the golf star. She recently committed to Division 2 Mercyhurst University on a golf scholarship. She will continue her golf career and education at the next level.

Lena comes from a family of golfers which has only motivated her training and enhanced her game. She applies the skills of leadership and focus in her daily life. From a young age, Lena played against her older sisters Jestina the eldest who is now 32, Natalie 29, Yvonna 27, and Alanna who is closest to Lena’s age who is now 21. The sisters all have pushed and motivated each other along the way. Lena didn’t originally want to play golf in college. It took her seeing her seeing the process to really buy into it. Lena said “ I didn’t really decide I wanted to play until 5th grade when I saw my older sister begin the college process.” Everyone in her immediate family has played golf. Her grandfather taught her dad, who then taught her mom and her father continued the family trend by teaching Lena and her sisters. Lena’s niece has even been taught how to golf and she is very skilled at the sport as well.  Lena is a hard worker and motivates the people around her. She is always smiling bringing positivity leaving smiles on the faces of the people around her. Jones said that “playing with her sisters is probably the best competition she would get.” Lena is the baby of the family so she had to work hard to be able to compete against her much older and talented sisters whom she had to play against her whole life. Lena expressed that for her there is a difference of playing at school versus against her sisters whom she is competitive with because she is the youngest. She believes that she is more focused and driven when practicing against her sisters because of the sibling rivalry that she has with them. She is the youngest but by no means does she let that stop her from pushing herself to be the best.


“Lena plays so that she makes the people around her better.” – Momo LaClair

Lena is adored by her teammates. She is one of the captains of the J-D golf team and she is a leader. Junior at J-D Tracey Edson who plays golf with Jones said “ Lena sets a great tone for us, she is a great golfer and she cares about all of us, she is always there to encourage our team.” Lena uses her gift and ability to help elevate the overall level of her team. She is someone that the girls on the team look up to. Lena is so humble and just an overall great person to have around. This golf season is sadly Lena’s last season with the Red Rams she is going to be missed next season both on the course and off. Lenas determination, will to win, and leadership will only be here with the J-D team for one more season but her presence will never be forgotten. Keep an eye out for the golf star as she finishes her last season as a Red Ram.


“ Lena sets a great tone for us, she is a great golfer and she cares about all of us, she is always there to encourage our team.” – Tracey Edson

Lena also plays Varsity Basketball here at J-D she is just as hardworking in that as she is in golf. Basketball is not Lena’s main sport but she still puts in effort. She is always cheering her teammates on and when she gets in the game she puts her best effort forward. She will do whatever needed to win when she plays. She will dive on the floor for loose balls, rebound, and be aggressive when needed.  She is adored and loved by her basketball team just as much as the golf team. Lena has a personality that just draws people in. She welcomes them with open arms. On both teams Lena makes people smile when they are having a bad day and listens to them when they are struggling with something. Her openness to others is one of her best qualities. This quality allows her to make an impact on both the basketball team and the golf team. Lena and the girls basketball team had a very successful season and they are headed to the state tournament to compete for a state championship. Lena’s golf season has to be put on hold until the end of the basketball season. Sophmore basketball player at J-DHS Momo LaClair said “Lena plays so that she makes the people around her better.”

Lenas Third sport is Tennis which she played for 2 seasons at the varsity level. Lena has continued the Jones family golf legacy very well and she has lived up to the name. She does not let that get to her head in any way and still continues to practice and put in her maximum effort. Last season, Lena was a first team all-star for Section 3. She has been on the Varsity team since she was in eighth grade. She has developed into a very strong golfer over the years. The three sport athlete is set to do big things at Mercyhurst. Her teammates, friends,coaches, and family can not wait to see what her future has in store. She has left her mark on J-D and touched so many lives along the way. Lena Jones, golfer, basketball player, tennis player, teammate, friend, daughter, sister, is almost ready to begin her next journey and all the people she has helped along the way are rooting for her.