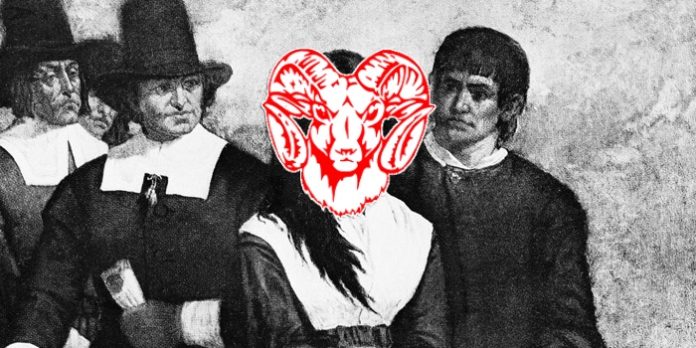 “I’ve tried everything. I consulted the CDC guidelines, the WHO guidelines, the county’s guidelines and yet coronavirus is still a concern at JD schools,” principal Gasparini revealed to reporters. “I talked to numerous students and all student organizations, but surprisingly, Harry Potter Club couldn’t help me find a solution to the covid cases at our beautiful school. However, one club had a very original plan and, at this point, I’m willing to try anything.”

Astute scholars of US history may be thinking that this new plan sounds an awful lot like the Salem Witch Trials. In these assumptions, these scholars are very nearly correct. These are the Salem Witch Trials. Because, according to the JDHS Puritan Student Association, witches are obviously the cause of crop failure, cattle disease, hats without buckles, and COVID-19.

On Friday, October 9, Mr. Gasparini unveiled his new plan. When a student enters the building, they are weighed to see if they weigh the same as a duck. If they do not, they are excused to go to first period. If they do, they are thrown into a conveniently placed kiddie pool to determine their ability to float in water. If a student floats, they are swiftly escorted to the main office to await trial, run by the Mock Trial Club.

“I’m getting so much real world experience!” Mock Trial Club member Sehej Bajwa stated in an interview. “This is going to look so good on my college applications!”

“I think that what Mr. Gasparini is doing is amazing,” said JDHS Puritan Student Association president Benevolence Cromwell. “Witches hide among us and it’s time to take action and rid the world of evil.” He went on to describe his feelings on the Church of England and why he believes women shouldn’t be educated.

However, non-Puritan students are less than pleased with this new system.

“I failed the duck test and had to get in the kiddie pool,” sophomore Cameron Jennings told Yampage. “When I didn’t float, the testers sent me to class. I had to walk around with wet pants all day. It was awful.”

“I got pecked by the duck,” said junior Becca Fitzgerald, showing off her duck induced injury. “It really hurt.”

“I made the mistake of wearing a Halloween themed mask to school the other day,” sophomore Halloween enthusiast Luke Cantone reported. “I thought it was cute, but the witchfinders thought it was suspicious and put me on trial. It took all day and when they realized I wasn’t a witch, I had to make up all of the work I missed. I’m up to my eyeballs in Honors Biology work!”

So far, the trials have found no cases of covid-19, but have found seven witches.

“Some people say that the Salem Witch Trials were ‘medieval’ or ‘primitive’, but you have to admit, they were pretty effective at finding witches,” Mr. Gasparini told reporters. “If this doesn’t work out, I’ve got a meeting with Spanish Club next week. They say the solution to covid is conjugating verbs.”