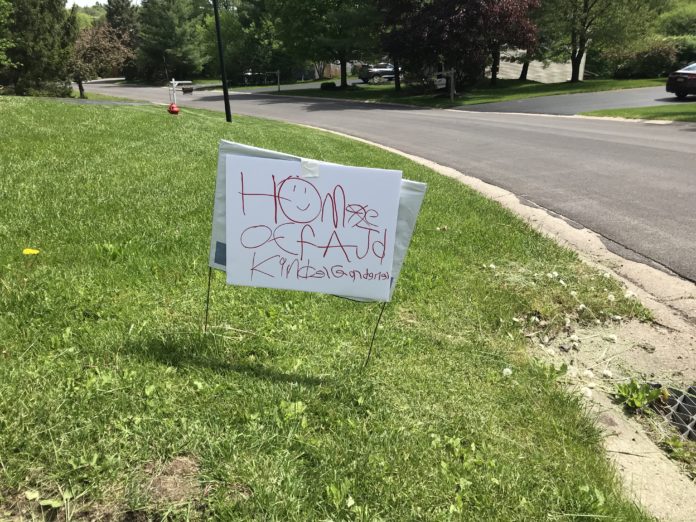 With the remainder of the school year cancelled, lots of attention has been directed toward seniors. However, another group of JD students feels that they aren’t getting the sympathy and attention they deserve: kindergarteners.

“Why do the seniors get to be the only ones who get yard signs? The class of 2032 won’t get to go to Bingo Basket Night, but all anyone cares about is how the seniors won’t get a graduation. They’ve already graduated from elementary school and middle school, it’s not fair!” one Moses DeWitt kindergartener whined before throwing themself to the floor and crying for Mommy.

“We’re really being robbed here, the seniors aren’t sharing,” another kindergartener stated, “I’m never gonna learn the end of the alphabet. What comes after k?”

Many kindergarteners have picked up magic markers and made their own yard signs in protest of the signs distributed to seniors. One sign on Hamilton Parkway reads, “hOm off a JD kinder gardener.” Another reads, “My favorit coler is PINK!!!”

“I think trying to get attention has really joined us kindergarteners,” kindergartener Nora Newton told Yampage reporters, “I had never really talked to the kids from the blue room before but we Zoomed the other day and they’re pretty cool and finally the rivalry between the red and yellow rooms has ended I miss school have I mentioned how cool the toys at school are they’ve got like so many blocks and they’ve even got the smelly kind of markers at home I have markers with glitter in them and they’re like my favorite markers ever there’s a blue one and a green one and a purple one and purple is my favorite color did you know that purple comes from red and blue?” That interview lasted another twenty minutes before naptime.

“They’re doing what now?” one kindergarten parent asked. “I guess I was just glad that they were playing on their own. I don’t know how much more P.J. Masks I can take.”

“I’ve been doing Zoom check-ins with my class,” kindergarten teacher Andy Palumbo reported, “At first all they wanted to do was show off their toys and pets, but now they spend the check-ins making strategic game plans for how to upstage the seniors. Last time, they kicked me out of the call! I’m honestly a bit worried.”

The kindergarteners were planning a protest parade, similar to birthday parades, but on trykes, except they decided they would rather play Frozen dress up and abandoned the idea entirely.

Guiseppe Baxter - February 11, 2019 0
“They destroyed everything…” Mr. Brodsky told Yampage, shaking and desperately clutching another picture of an eye drawn by a freshman.