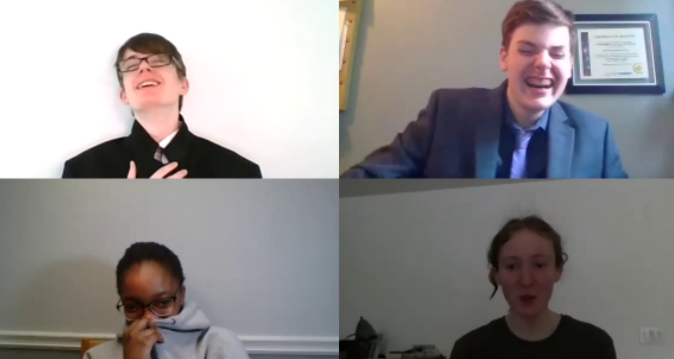 The JDHS Drama Club is adapting to covid-19 in a new and innovative way to put on their annual spring play. This year, the performance will feature 8 student written plays by talented students from all grades.

The plays are Departure, Arrival, and Everything in Between, co-written by Anka Chiorini and Madie Phillips, Running by Becca Fitzgerald, The Sun is Setting on Out Empire by Meghan Christian, Purge by Sondrine Blusk and directed by Jasmine Ho, Under the Surface by Morgan Morocco, I am Your Android by Connie Zhang, Order! Order in the Court by Jasmine Ho, and History’s Most Prominent Leaders by Tara Pollock. To learn more about what the entire process was like, Sam Phillips spoke about his experiences as first-time producer.

With this being Phillips’s first year in an important position of leadership, he said that it was really fun figuring out things as the show progressed and he gives lots of credit to the directors that made his life easier. They made the show run smoothly and tackled anything that he sent their way.

Throughout the course of the entire school year a main obstacle clubs, teams, and extracurriculars have had to face is how they will go about their regular schedule in the middle of a pandemic. Defying the odds and persisting through challenges has remained a theme for this school year, and how the drama club is adapting will guarantee an amazing performance.

In previous years, the show has been a 90-minute play; however, this year it will be composed of 8 ten-minute plays that will be available to watch on their own from June 16th-23rd. Phillips has said that “it’s late in the year and people are busy so I want to give people ample time to watch the shows as they please.” This makes it easy for viewers to watch as much as they want without taking a whole 90 minutes out of their night.

Another difference from previous shows is that all of the short plays are completely student written and directed and will be performed fully remote similar to last year’s show, No Exodus. Many of the featured writers submitted plays for the Syracuse Stage Young Playwrights Competition and saw this as a “great opportunity for their plays to come to life”, said Phillips. After only being in Drama Club for one year, he had a lot to take into consideration with stepping into the role of producer.

After talking to the club advisor, Mr. Berger, the plans for this year’s production were up in the air but Phillips knew that he wanted the club to accomplish something this year amidst all of the chaos and uncertainty this school year has brought. He explained that at the last second, they sent out a call for student plays and got more responses than they had ever anticipated. “I think that’s what really made me excited to take on this leadership role. Knowing that there are people who have never done a Drama Show or have never had any sort of theatre experience before who are willing to step out of their comfort zone to make something happen is really inspiring and really motivating,” he said.

Now what would a drama club show be without the amazing directors and playwrights? For those such as sophomore Morgan Morocco, in her first time ever directing a show, she said that there was a bit of a learning curve. She and Connie Zhang both agreed that once they got their main ideas of how they wanted the play to look, it was smooth sailing from there. In Madie Phillips and Anka Chiorini’s co-written play, they explained how they made it come together through compromising and having fun bringing new characters to life and having them react to one another.

Most of the directors and playwrights were finalists in the Young Playwrights Competition and felt compelled to contribute their pieces and try something new and see their visions on the page come to life.

Another challenge the directors faced was conducting rehearsals with their actors all over Zoom. This made it harder for Connie Zhang to produce the effects she wanted with props, but patience and flexibility through the learning experience made it come together in the end.

Madie Phillips also expressed how she was proud of everyone for putting their best foot forward despite the circumstances.  Everyone involved with this year’s production has persisted through challenges to showcase their immense amount of talent with the school.

Producer Sam Phillips said, “My biggest hope is that everyone who was involved with the show leaves feeling proud of what they’ve accomplished.” He also hopes everyone tunes in to watch with the link provided and enjoys every moment. As a whole, the directors hope that viewers will understand a deeper meaning behind each of their plays and leave feeling impacted in any way possible.

You certainly will not want to miss out on this opportunity to see brilliant plays come to life. They will be available to watch at http://tinyurl.com/2021jdhsdramashow from June 16th and will be taken down on the 23rd.

“Never Have I Ever” Season 2, Even Better Than the First?