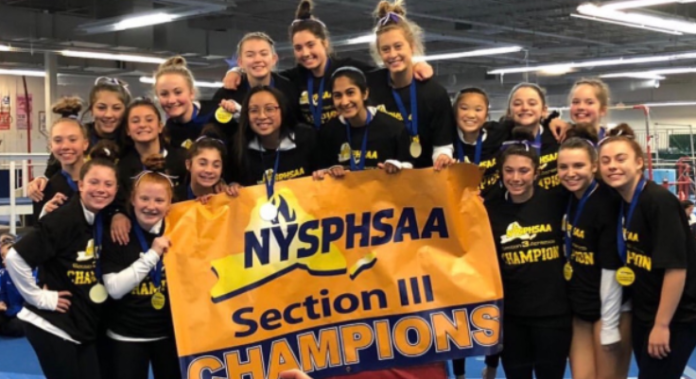 The Jamesville-DeWitt and Fayetteville-Manlius girls gymnastics team was recently named the Section 3 gymnastics champions. The team was one of many to compete at the section meet on Oct. 19 at CNY gym center. The team came up on top yet again winning their 18th sectional title in a row for their schools.

The team had been working hard the past couple weeks leading up to sectionals. Sophomore Zoe Potamianos said, ”We really focused on our routines during practice rather than games and conditioning, and worked harder than we’ve ever done before.” In order to prepare for sectionals during practices the girls repeated the skills they were struggling on and made sure that they could successfully accomplish the skill before moving on. Also, many girls worked outside of practice at their own gyms. During the week most girls on the team went four to five times a week after their practice to their clubs to help perfect their routines.

The JD-FM gymnastics team brought their all at sectionals when facing the competition at the meet. Some of the teams that were there included, East-Syracuse Minoa, Baldwinsville, New Hartford, Utica-Proctor, and Rome. “Our biggest competition there was definitely New Hartford.” said sophomore Lily Hadley. As well as winning sections, the girls also won over all beating the small schools group and their own big schools group.

The team performance at sectionals from the JD-FM gymnastics team was exceptional. Senior Ana Dieroff described the the meet, “Our team did really well in executing our routines. We also achieved our all time high in all around score.” Many of the girls felt that winning sectionals was a huge accomplishment since they’ve been working for the win ever since the beginning of the season.

Now that the season is over and sectionals is complete, senior Taylor Fishkin, sophomore Zoe Potamianos, and freshman Rylee Fishkin will be moving on to states, in February. The trio will be preparing for states at their own gyms since the season regular season has concluded. The three are working hard to represent their team and bring home a state title.

The team worked hard this season in order to hold the sectional banner and their medals while smiling for the camera this past Oct. After an overall successful season, the team will be back next year ready to achieve their next sectional championship.

Boys Soccer Settles for a Tie in Crucial Senior Night /...