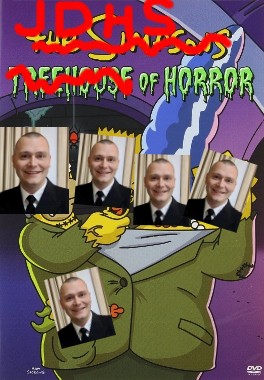 In the spirit of Halloween, I have gathered some very true spooky stories from the halls of Jamesville-DeWitt High School.

1: My Life as an English-Teaching Werewolf

In the Red Hall at exactly midnight on a full moon, a sharp howl can be heard… It is unclear what the cause of this howling is. Some students think it is just creaky old desks, the janitors working overtime, or maybe even the Blue Hall unrenovating itself, but some theorists suspect J-DHS has a werewolf… Who it is remains a mystery. While some like Mrs. Conner have unhealthy obsessions with zombies and monsters, it is unlikely that it is her as everyone knows werewolves would never raise suspicion to themselves. Some curious students have left turkey slices out before school closes only to find them to be gone the next day; could it be that a werewolf has gobbled them up for a midnight snack? Or possibly a janitor cleaned them up? We think it’s more likely a werewolf ate them, though. While we may never know why stray hair is being suspiciously left in the bathrooms, we know we can remain vigilant in hunting this werewolf.

Ever since Mr. Lawson joined the J-DHS staff, there has been a new chill in the school. Was it the summer air conditioning? Or was it a vampiric chill? Some evidence for this theory is provided below:

Exhibit A: Mr. Lawson sure loves his fire drills, especially during nice sunny days, but has he ever stepped out to join us or does he just stay inside his dark office?

Exhibit B: On October 1, the school provided students with an Italian lunch, fit with garlic bread, nutritious for both human students and staff, but students noticed Mr. Lawson did not collect a meal for himself.

Exhibit C: Mr. Lawson is known to dress pretty formally on a daily basis, similar to how vampires dress… But the uncanny similarity is that they both participate in Casual Fridays!

Some students have led vampire hunting squads to try to capture a photo of Mr. Lawson to see if he appears, shined a sun lamp in his office, and even gone to the lengths of throwing holy water on him (this one doesn’t appear to work and is a great way to receive a detention).

This year, J-DHS has implemented a new way of monitoring students in the halls called the digital hall pass. It’s simple to use: scan the QR code provided and fill out the Google Form. So, why are students struggling to use it? Well, there have been sightings of a small green man with pointy ears sneaking into classrooms at night and using a Sharpie to add one extra pixel on the QR codes so they do not work. What are his little goblin motives, we ask? Is it to prank the students? Or does he work for CBA and is trying to sabotage us? Some questions are better left unanswered.

I hope these stories send shivers down your spine and that you have a happy Halloween.