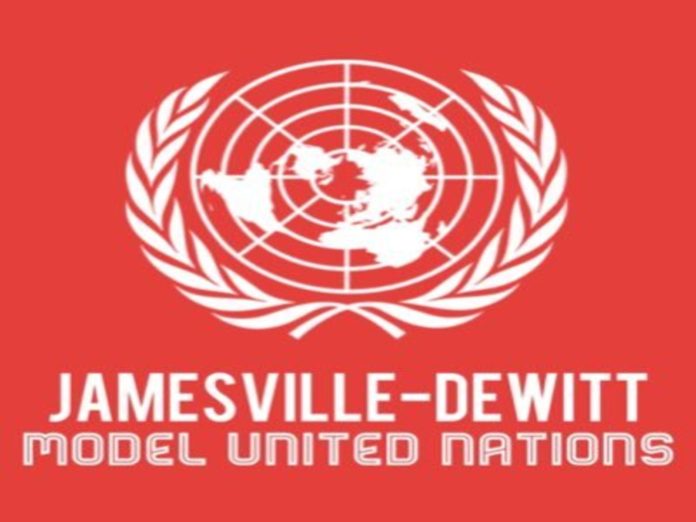 To promote the upcoming conference, the MUN club officers have filmed a promotional video that aired on RamFeed this week.  The officers also hosted an informational meeting for interested seventh and eighth graders this week.  The meeting was on Wednesday, April 21 at 11:30 A.M.  While the meeting has already occurred, feel free to reach out to MUN co-president Kate Barclay at 22kbarclay@jd.cnyric.org.

The general structure of a conference remains relatively constant.  There is an opening ceremony featuring a keynote speaker — in this case, it will be Cooper Adams from Farmlink, a group dedicated to fighting food insecurity by connecting farmers with food banks.  Each conference has an overarching theme, and JDMUN’s is sustainability this year, hence why Mr. Adams from Farmlink was chosen.  Following the opening ceremony, delegates will attend their first committee session, during which they will represent their country and work with other nations to find sustainable solutions to global issues.  Then there will be a brief break for lunch.  Following that, the second committee session will commence, and delegates will offer further solutions to one or more global issues. Awards are presented at most MUN conferences to the delegates that contributed most to the committee, but because JDMUN is a training conference, there are no awards to be worried about.

Committees at JDMUN 2021 are the General Assembly (GA), United Nations Environment Programme (UNEP), UN Women, the World Health Organization (WHO), and Crisis.  Crisis differs from the other committees in that rather than working to pass one or two resolutions for the topic, delegates will work together to create a series of directives to address problems that arise and change throughout the committee session.

Each committee has two to three chairs that lead the committee.  Many J-D MUN club members have been selected as chairs for the committees, and a few kids from CBA will also be chairing.  For those interested, I will soon post a separate RamPage article about how committee sessions work.

According to MUN advisor and history teacher Vitaliy Yanchuk, “The purpose of the conference is to introduce interested students to the world of MUN and the basics of parliamentary procedure, public speaking, and research.  The conference will take place in a small group setting inside each committee (most likely no more than 15 delegates per committee) where new delegates will be coached and guided through work in a committee.  The hope is that attendees will join their respective MUN clubs next school year, be that J-D, F-M, or CBA.”

Aside from the fun of conference experiences, many promote MUN as a way to get into college.  According to PrepScholar, “Model UN is a great extracurricular for students looking to learn more about politics, current events, or international relations and for students who want to improve their public speaking or debate skills.”

Fellow MUN advisor and history teacher Donna Oppedisano shared about the history of the club and the conference.  “In the early days of MUN in our school (the 1960s – we have operated continuously since then and are the longest running club in the school) and even into the early 2000s Jamesville-DeWitt Model UN held its own large conference here at J-D.  As time went on, however, students became busier and busier both participation in the conference and in the club itself lagged and the conference was ended.  A few years ago, advisor Jamie Crawford [and I] had the idea to reinstate the conference with a new mission.  The new conference would focus on training young people (7th and 8th grades) in the ways of Model UN.  This new training conference would give our students and those from surrounding schools the opportunity to participate in a welcoming, supportive environment and serve to increase the number of students exposed to Model UN, and thereby grow participation in our club.”

Semi-Formal Returns for the 2021-22 School Year

The Children of Steel Offers Free Tutoring to All Elementary Students