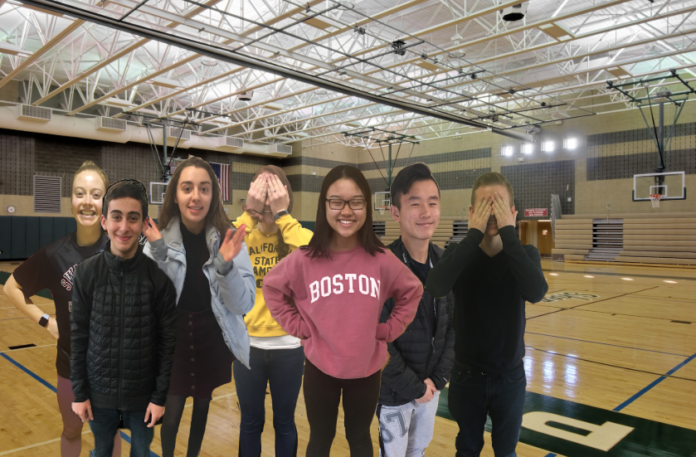 DeWitt, NY — When one thinks “J-D Sports”, one may think of the skilled girls’ varsity soccer team, the accomplished cross-country team, or even the football team  whose games so many students attend. However, very few students are aware of the Jamesville-Dewitt hide-and seek team. Coached by Mr. Kevin Sommer, the hide-and-seek team as we know it today has been hiding and seeking for almost 70 years with absolutely no recognition.

The team was formed in 1954 in an attempt to make nuclear bomb drills seem more fun to the students, but to the school’s dismay, none of the star athletes tried out. Eight of the school’s pudgier students ended up forming the roster. During the spring pep rally, the team of underdogs held a massive hide and seek against the school’s best athletes and demolished them.  J-D’s more well-known athletes were mortified by this upset and bribed the yearbook staff 10 dollars (worth $93.57 in 2019) to destroy all photos and articles covering the pep rally. However, due to a clerical error, a faded photo still remained buried in a 70-year-old cabinet at the back of the science office. Sommer found this photo in August of 2012 while preparing for the upcoming school year, as well as an 80 year old man hiding in one of the cabinets from the rest of his hide-and-seek team.

“I couldn’t believe no one had talked about this. Hiding and seeking is already one of the most overlooked sports in the world, and to know that J-D erased it from their history is just horrible. I needed to make things right.” He said in an interview.

And so he did. Beginning that year, the team held tryouts in the auxiliary gym, on the gym floor-access to bleachers, closets, and locker rooms were unavailable- but somehow a team of eight stellar students hides themselves (or finds others) almost magically. Each year, there are six hiders and two seekers. This year’s team consists of 2 freshmen (Kami Petrosillo and Max Fagelman), 2 sophomores (Evelyn Tao and Marcus Payne), 2 juniors (Eva Schooler and Caleb Porter), and 2 seniors (Emma Galletta and Alan Gao). Each member of the team was picked for their unbelievable hiding and seeking abilities, such as Porter’s ability to completely camouflage with his surroundings.

“It was actually a fortnight before the team found him during his first practice,” Mr. Sommer said. “His dedication to the hide and seek craft is unprecedented.”

However, even since 2012, the team has still remained unknown to most students. In an interview with the team, we asked their opinions on their isolation. “It’s actually really frustrating,” said Emma Galletta, senior seeker and team captain. “During pep rallies, all the team captains come up to take their deserved hour each of bragging about their wins, but that’s something I’ll never get to do.” Eva Schooler, junior seeker, claimed that the hide-and-seek team is ridiculed by the few who know about it. “They seem to think it’s not a real sport,” she said, while Yampage journalists took note that J-D Golf still exists. Lastly, we attempted to interview aforementioned star hider Caleb Porter, but he was so engaged in his devotion to hiding that he ran away from our journalists and seemingly disappeared into thin air. “Caleb,” we called, “please answer just a few questions.” Alas, not a response. “He trusts no one,” commented senior hider Alan Gao. “The only time he was ever caught in a match was by a member of the opposite team disguising themselves as an expert on national parks with a special apprenticeship opportunity for him, which is surprisingly allowed. He never wants to be beaten by his own interest in national parks, or anyone, ever again. He wants to be the very best.” (At this point, we weren’t sure if Gao was still talking about Porter or a Pokemon trainer, but it still applies.)

The team really is the “very best”- they’re number one in the area, city, county and state, due to being the only hide-and-seek team left in New York. Most hide-and-seek teams had collapsed along with the Soviet Union at the end of the cold war. However, in competitions with any group of people they’ve faced over the course of the 2018-19 school year, whether it be Sundrop Rise, the cast of Elf the Musical, or the Syracuse men’s basketball team (all of these were not organized games, they were provoked by disrupting live events in hopes of getting the talented groups to attempt to find them after they ran away, counting down from ten), the team stands 94-0 for the season. However, the team may not be the only hide-and-seek team in the country- rumor has it that there still may be an existing team in Kansas, and possibly one in Montana. Due to the team’s non-existent budget, they have no way to travel to face them. At the bottom of our article is a gofundme link to raise money for the team to travel to meet their only true competitors (but first, they have to use the money to compensate for the time and energy lost by local celebrities when they were forced to play hide-and-seek.)

“This team really sets the bar for the attitude our students should have. Passion, energy, determination, and you can’t go wrong with your love for golf. We are JD!” Exclaimed Mr. Gasparini. Journalists then informed him as to which team he was speaking about, to which he replied: “We have a hide-and-seek team?”

Skills: Should have been the 2019 MVP based on skill, but felt as if the seekers were really trying their best and deserved to find him, so he made it a little easier on them.

Skills: Able to detect any human presence within a 12 mile radius and without the sense of sight, and then engage in political discussion with that human presence.

Skills: Already stated in the article, but he asked us to add that his skill doesn’t only lie in the hide-and-seek field. He considers himself to be mediocre at hide-and-seek, but science olympiad, well, that’s another situation. He absolutely adores-

Skills: She won’t say it’s cheating, but Tao will admit that a large part of her success as a rising star in the sport is Krispy Kreme doughnuts. The only way to do the impossible- raise money for my class- is selling Krispy Kreme doughnuts. “I don’t do anything against the rules. I just leave some doughnuts in the places where I am not hiding, and the seekers are magnetically drawn to the doughnuts and not me. Sometimes they’ll even leave money next to the doughnut just for looking at it, either habitually or out of respect for the doughnut.”

Skills: Mastered the art of cache-cache, the French version of hide-and-seek. Only speaks French when in gameplay, which other team members say is odd, but seems to work.

Skills: Not particularly good at hide-and-seek, but very argumentative, which helps the other players immensely. When someone says “I found you”, she will often say “No you didn’t”, which will spark debate, thus giving other hiders more time before being found.

Skills: (Our personal favorite), frequently uses the power of the press to expose the corruption of seekers. After investigating further into the practice history of his finders, he has scared seekers away from trying to find him for fear that they will be exposed for using a small flashlight or a magnifying glass.