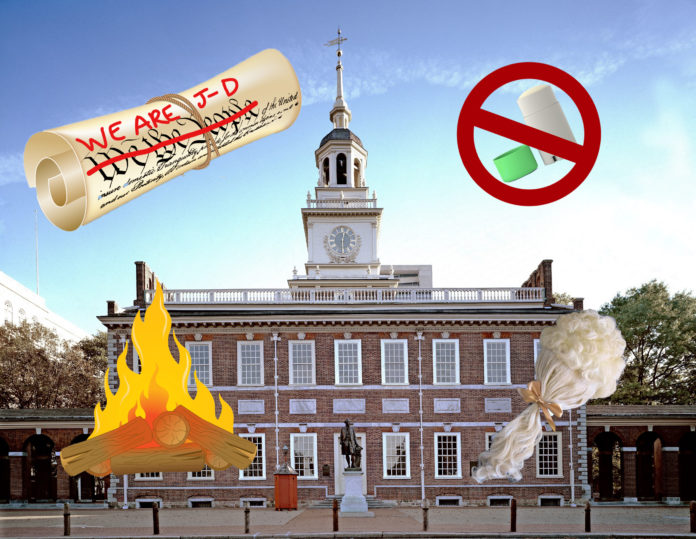 When the J-DHS Constitutional Convention was announced during Mr. Gasparini’s engaging presentation at the start of the second quarter, our YamPage insiders weren’t the only ones whose interest piqued. A reported 24.8% of students actually took a brief glance up from their phones upon its announcement. And, as such, over the past two weeks, our YamPage breaking news hotline has been assailed with requests to learn more about this Constitutional Convention. “Are they keeping all the info secret like the delegates did over two centuries ago?” was one of 43 similar questions. Everyone knows that the U.S. Constitution is one of the greatest achievements in human history, so how in the world is the J-DHS student government planning to recreate its utter brilliance? Well, a pretty climate-controlled classroom in the dead of winter with modern-day fashion definitely won’t cut it, we soon learned.

“Just like back in the summer of 1787 when those great men were drafting the Constitution upstairs in Independence Hall in Philadelphia, we are bringing the sweltering heat and lack of electricity to the students, along with a ban on deodorant for at least 48 hours prior to the convention,” Principal Gasparini told YamPage enthusiastically. “Obviously, we can’t avoid the masks, which distract from the historical accuracy we’re trying to achieve, but hopefully their follicles will be able to feel the humidity and stuffiness experienced by the earlier delegates.” The custodial staff has already expressed concerns with Principal Gasparini cutting the breakers and creating a makeshift fireplace in Mr. Cottet’s classroom, but, at this point, he is an unstoppable force.

Mark Bratslavsky, secretary of the student government, was equally as excited about the convention set-up, but for a different reason. “While the founding fathers may have had good heads on their shoulders, we know that their Enlightenment thinking can’t account for all of the genius oozing off of the Constitution’s pages. I mean, when you’re wearing a wig like that at least 70% of your intelligence has to be radiating off of its powdery brilliance. And we’re looking to increase our intelligence with these… magnificent… powdery-white… wigs…” Bratslavsky then left our conversation mentally and gazed, in awe, at the powdered wigs already sitting, prepared, on the windowsill of Mr. Cottet’s classroom.

Rumours have been floating around that one of the student government members has an ‘in’ with the costuming staff at the Broadway production of Hamilton (something about a long lost sixth cousin’s dog walker’s neighbor’s aunt?), but we were assured that if “the trade wasn’t successfully acquired,” then all delegates would just be expected to wear tights, two pairs of pants, three shirts, their winter jacket, and—of course—one of the powdered wigs to the convention.

We will continue to update you as this story progresses and we finally learn what the student government is actually trying to achieve. All we know is that it is sure to be one of the hottest events of 2022.

Agatha Smoot - December 22, 2020 0
However, if you aren’t confident enough in your cooking abilities to take on these recipes just yet, not to worry. Mr. Hartley has just announced that he will be coming out of food-vlogger retirement to create twelve step-by-step tutorials assisting new chefs in their holiday yam preparation.