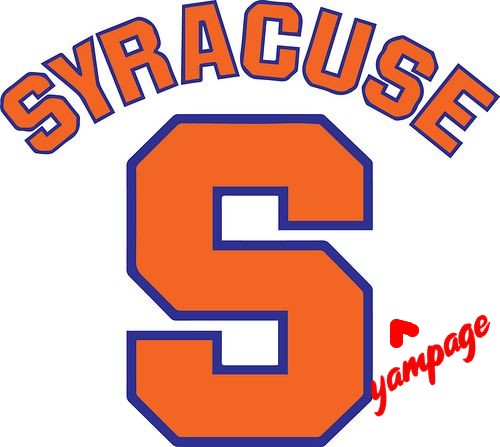 The sweatshirt in question was a bright orange, which clearly represents yams. It was so orange in fact, that one could call him an “orange man,” but they probably wouldn’t do that. The glorious garment also bore a large, blue “S,” which we can only assume stands for “Satire!” or “Student-run” or “SYamPage.” What else could an orange and blue sweatshirt with an “S” on it be for in Syracuse, NY, home of the Syracuse University Orange? Nothing I can think of! The next day, he even wore another YamPage sweatshirt! This one was pretty low quality, though. They even spelled YamPage wrong! There’s no “r,” “c,” “u,” or “s” in “YamPage!” It’s almost as if they were spelling “Syracuse” or something!

“We here at YamPage were so moved by Max’s outfit that we decided to make him an honorary staff member!” YamPage editor Anka Chiorini stated.

That’s high praise! Since receiving the momentous title, Oppedisano has found 15 yams in his locker. The YamPage staff is also planning a parade in his honor because, as Chiorini puts it, “Such a display of YamPage support should not go unnoticed.”

When asked for a comment, Oppedisano asked, “What’s YamPage?” He’s clearly getting into the YamPage spirit. If he keeps making jokes like that, Chiorini will have some competition for the editor position!

It’s stories like these that remind us that there is some good left in the world.

“All I Want for Christmas is You” to be Played on...