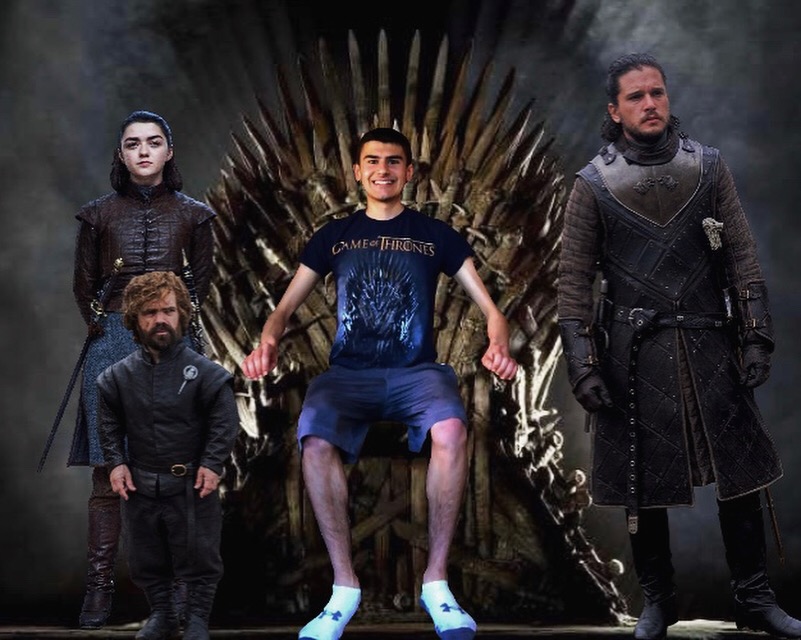 This article contains spoilers for the series Game of Thrones

When the creators confirmed that the show would reach its conclusion at the end of season eight, viewers across the globe anxiously anticipated a final season that would gather all of the specialties of the series and fuse them into one momentous finale. Yet the world’s hope for a satisfying finish became less and less likely as season eight progressed. Not only was the pacing erratic but storylines of the series that had remained unresolved never reached firm conclusions. Prior to the finale, the pitfalls which had plagued the final season had already dissatisfied fans enough. Despite that, the finale “The Iron Throne” served the viewers with unwarranted yet sincere slaps to their faces. “The Iron Throne” was a pure disgrace against the applauded consistency upon which the legacy of Game of Thrones had built itself. Eight seasons of minute yet consequential details all flushed down the drain in eighty minutes.

“The Iron Throne” practically picks up where its predecessor, “The Bells,” left off. Daenerys Targaryen just finished her flight on over King’s Landing, a trip which Cersei triggered after rightfully surrendering. Instead of accepting the surrender, Daenerys mindlessly proceeded to fly over King’s Landing for almost a full hour, using to obliterate the city’s infrastructure while simultaneously burning innocent women, children, and men to death. Even more, Daenerys, a woman who had traveled across Westeros in order to reach King’s Landing over the course of the entire series, decided that nuking the whole city was the most efficient option for reaching the throne. It makes perfect sense. Throw out the strategy of just killing Cersei and proving to those whom she rules over that she brings nothing but peace and freedom.

It seems that only the characters whose arcs did not seem totally ruined at this point (Jon Snow, Ser Davos, and Tyrion Lannister) understood the rapid switch in the character of Daenerys. While observing the carnage from the nonsensical attack of Daenerys, Jon confronted Grey Worm as he is ruthlessly executing Lannister soldiers who clearly had surrendered. Jon demanded that Grey Worm hold off from killing the soldiers until Grey Worm spit back that Daenerys had ordered it. Simultaneously, Tyrion uncovered the corpses of his brother Jaime and sister Cersei down in the rubble of the once Red Keep. Truthfully, the overall intent of this scene being solemn would not have been compromised if the writers had not destroyed the arcs of the characters over the past season. The fact that the showrunners had already wrecked Jaime’s redemption arc through his relationship with Brienne would not allow for one single scene, in which he is dead, to resurrect his decisions. However, the three Lannister siblings being together as their final scene topped the lackluster death scene of Cersei and Jaime by themselves.

Soon after, Tyrion made his way to Daenerys as she was making a speech in front of the gates of King’s Landing. Now, before showing her audience, a sophisticated viewer may infer that she is indeed speaking to herself since practically her entire army met their end during the first thirty seconds of the Battle of Winterfell. Yet this is the eighth season of Game of Thrones, where nothing makes any sense at all. Before she is abruptly interrupted by Tyrion, she was addressing the hundreds of the tens of the Unsullied and Dothraki who had remained after all of their hardships. Tyrion then resigns as Daenerys’ Hand in protest of her inhumane act and Daenerys orders Unsullied guards to arrest Tyrion for treason, a plot point that all viewers could see a mile away. While Tyrion is helplessly anticipating his execution, Jon visited him in the room in which he is being held captive to talk with him one last time. For what seems like an eternity, Tyrion dragged on over Daenerys’ threat to both Jon and the world. Yet, after Tyrion gave up somewhat of a heartfelt speech, Jon still cannot grasp onto the notion that his “queen” just ruthlessly murdered thousands of harmless citizens and walked out of the room in stubborn denial.

The first half of the episode came to a sluggish conclusion after the next scene, which mimicked the climax of a Shakespearean tragedy. Jon, finally pulling himself out of that state of mopeyness that had plagued his character for the past two seasons, confronted Daenerys as she prepares to sit on the Iron Throne for the first time. Admittedly, the camera shot prior to this scene of Daenerys walking up to the Throne as is snows was beautifully clever, for it replicated the setting of Daenerys’ dream sequence back in season 2. Realizing that he cannot dissuade her, Jon found himself forced to choose between duty and love and stabbed Daenerys after sharing one last kiss. Moments later, powerfully shrieked and immediately came face to face with the new Queenslayer. Instead of turning Jon into ashes, turned and spontaneously smoldered the Iron Throne. Still blazing, cradles Daenerys in its claw and flies into the distance. Why does the dragon do all of this? Simply because recognizes that the Throne is a symbol of absolute domination which will ultimately lead to its holder’s greedy downfall. In simpler terms, power equals bad. It’s a shame that there is not another season of this show. The writers could have crafted a storyline that would teach its audience that sharing is caring.

Weeks later, after a completely ignorant Grey Worm ordered for Jon’s imprisonment, sixteen of the most powerful individuals in Westeros congregated in order to discuss Jon’s fate and the future of the Realm. Tyrion, still a prisoner, proposed that a council ought to nominate the future monarchs rather than having a ruler inherit the crown. Moments later, possibly out of desperation, Tyrion nominated Bran Stark as the king first king in this tradition. Yes, Bran, because he “the most stories.” Not Jon Snow, who is the true heir to the throne. Not Sansa Stark, who is the rightful heir after Jon and who had accumulated impressive ruling credibility and experience like no other character of the show. Not Arya Stark, who had perfected the art of shape-shifting. Not even Ser Davos, the man who had successfully endured the most infamous battles of the entire show, including the Battle of the Bastards, Battle of Winterfell, and Battle of Blackwater Bay. But Bran, the spaced-out quadraplegic who had done legitimately nothing other than being sledded around for seven seasons in order to meet the Knight King (which proved to have no significance to the story in the end). Bran, the monotone-speaking boy who had blatantly asserted that he would never pursue power just seasons earlier. The only honorable contribution that Bran had presented took place during the Battle of Winterfell when he switched his vision to that of a raven so that the audience could witness a shot of Winterfell that did not look like a potato had filmed it. That surely is enough to qualify him as king of the Realm.

After a perplexing fifteen-to-one vote in favor for his appointment, the first council titles him as the king. Instantly, Bran named Tyrion as his Hand and worked to appease the Unsullied by sentencing Jon to rejoin the Night’s Watch. Satisfied with the negotiation, Grey Worm and his army head to Naath to live in peace. Yet instead of retracting Jon’s unnecessary sentence now that the Unsullied are absent, Bran does nothing to free his brother. In the end, Jon Snow finds himself right back at square one, meaning that the once-compelling fact that Jon was actually a Targaryen carried no seriousness in the end. The idea that in the end, Jon Snow is just another person entirely tarnishes the memorable plot points of which he was a part, including his upbringing with Ned Stark as a fatherly figure, the numerous legendary battles that he led with valor, and his own resurrection process after the members of the Night’s Watch betrayed him. Of course, this pattern of botched storylines of characters is a commonality in the finale. In the final minutes of not only the episode but the entire series, Arya, now on a boat, intends to spend the rest of her life sailing and exploring the uncharted seas west of Westeros. Let’s just disregard the dense chunk of the series devoted directly to the transformation of Arya and send her off as someone we don’t even recognize. Plus, are we just to ignore the existence of that symbolic white horse that the final scene of the previous episode heavily emphasized? The only character whose storyline ended somewhat neatly was Sansa, now Queen of the North. Again, it would have made more sense for her to have been the leader of Westeros, but at least she had reached some magnitude of governing power.

Finales for television series are often a sensitive topic to discuss. There are finales, such as that of Breaking Bad, that are lauded across all crowds of people. The stories of already respected shows come to a tight and satisfying close in instances like this. There are finales, like that of Lost and The Sopranos, which remain polarizing among their audiences. Such finales often leave an open-ended conclusion by indirectly closing all open plot points, leaving the audience to make assumptions about the true ending. Then there are finales from series like Dexter that are universally panned by their viewers for their poorly written, cheap endings. In the case of Game of Thrones, it is an absolute misfortune to have to place “The Iron Throne” in the third category. The praise for a series that had once gained its importance in society through its involved yet thrilling storyline, its captivating visual capabilities, and its impressive consistency hijacked and reduced by one episode. It just goes to show that Rome was not built in a day, but it fell in one.