RamPage
Home Lifestyle Food Is the Popeyes Chicken Sandwich Worth the Hype? 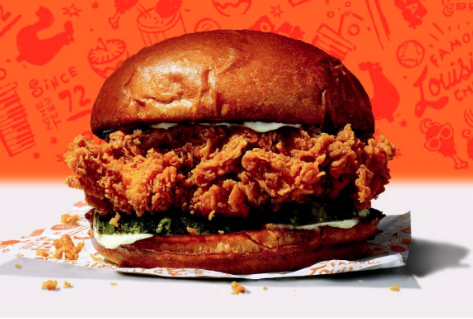 Popeyes Louisiana Kitchen is an American fast food chain with just over 3,000 locations in around 30 countries worldwide. They are known for their Cajun roots and their well-liked chicken.

For years, Popeyes has been most famous their chicken nuggets, tenders, wings, sides, seafood, biscuits, and desserts. Strangely enough, despite their massive success in chicken, they’ve never had a chicken sandwich that gained much traction with the public. In August 2019, that would change. Unlike previous sandwiches, this one is made with a chicken patty, rather than tenders between a bun. It also has sweet or spicy mayo, and pickles. People loved the new chicken sandwich so much that it sold out in only two weeks after its launch. Popeyes didn’t realize how much the public would fall in love with their sandwich, so they didn’t have enough ingredients (chicken patties specifically) to keep up with the demand. For over two months, Popeyes built up a supply, and a cult following around its chicken sandwich, as people anxiously awaited its return to the menu for good.

Even megastars had to try this beast of a sandwich. According to US magazine Food, Serena Williams tried one on her anniversary. The location happened to be out of pickles, but she tried it anyway, and much to her surprise, she loved it. She said, “Have I known life before this day?” Other celebs that couldn’t get enough include The Real Housewives of Atlanta star Porsha Williams, Houston Texans QB Deshaun Watson (even saying it cured his swollen eye), The Real Housewives of Atlanta star Cynthia Bailey, Final Destination actor Devon Sawa, popular journalist Gayle King, and Jimmy Kimmel’s son, Billy.

However, not everyone loves the new sandwich. Justin Bieber tried one in November. He posted his honest review on Instagram which was, “It’s good but it’s not worth the hype.” Other stars who weren’t taken with the sandwich included The Real Housewives of New Jersey star Lauren Manzo, and Isis King from America’s Next Top Model.

On November 3rd, National Sandwich Day, the chicken sandwich made its triumphant
return to stores to much fanfare. People lined up for blocks outside of stores for hours to get a taste of the chicken in all its glory, and they weren’t let down. In a statement to its fans, Popeyes said, “We loved seeing so many guests visit our restaurants. While we don’t disclose information on sales, we can share that some locations experienced drive-thru lines down the street and we saw in-store lines go out the front door. We are grateful to our guests who waited in line to try the sandwich and shared their love for our food through social media.”

I have never liked Popeyes to be completely honest. I have tried their tenders and
nuggets, and they weren’t good. Their Cajun fries and biscuits were great, however, and seeing how popular the new sandwich was, I just had to try it. While with my dad in Binghamton, I decided it was time. Unfortunately, I don’t like pickles or mayo, so I just got the chicken and the bun, but my dad tried the spicy chicken sandwich, which has pickles and mayo. And the verdict was… it’s great! I loved mine, and my dad said, “It was a surprisingly good mix of sauce, spice, and pickle yumminess.” He usually doesn’t like fast food, because he prefers to eat a healthier diet, so this was a surprising quote coming from him. After being so skeptical about Popeyes, I think the chicken sandwich was definitely worth the hype.

Dunkin Donuts Versus Starbucks – Who Has The Better Holiday Menu?