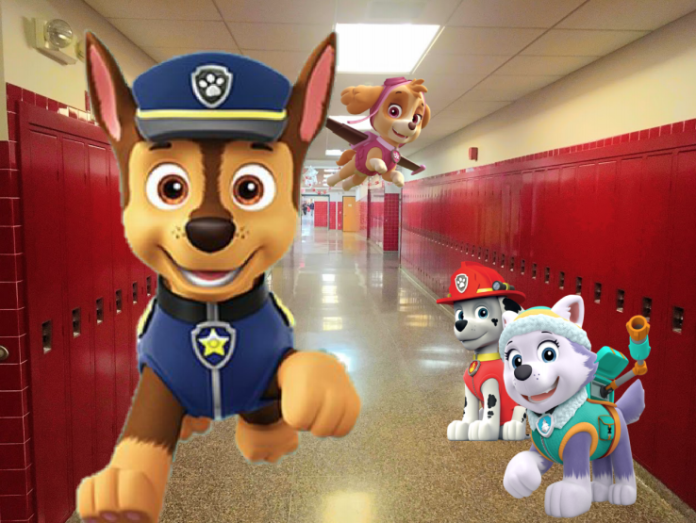 Dewitt, NY–This year, Jamesville-DeWitt High School has dramatically increased security measures. Many have noticed more security cameras, an upgraded window in the cafeteria, and the addition of a student resource officer, Officer Lindsey Pienkowski. However, Principal Paul Gasparini believes that these changes were simply not enough.

In a recent interview with Yampage, Gasparini stated: “We have to be doing more for security at this school, and it is one of the highest concerns in our community. I needed to hire the best of the best to protect our district.” Still, Gasparini didn’t know who to call. After interviews with Dwayne Johnson, John Cena, and Spider-Man, he was ultimately displeased, stating that “they just didn’t have the kind of attitude I wanted here at our school, the ‘We are JD’ mindset,” he said. “They were also all physically and mentally incompetent for the job. I needed the strongest, the fastest, the smartest.” It was only when Gasparini sat down to watch some mid-day television that he realized who he needed.

“It was 12:30 P.M on a Sunday afternoon, and I was curious to see what programs my students would be tuning their bright eyes and ears to on this lovely day, so I turned on Nick Jr. to better understand my student population,” recalled Gasparini. Sure enough, after the fifteen minute mark, Ryder and his team of pups had single-handedly rescued three small monkeys, a few humans, defeated the unscrupulous mayor of a parallel town to theirs (along with his team of troublesome cats called the “Kitten Catastrophe Crew”), and made it home in time to celebrate their victory (humbly) with the rest of the citizens of Adventure Bay.

Gasparini was in total awe, and picked up the phone promptly after the credits rolled down the screen to get in contact with the patrol. Though the pups were understandably frustrated that Gasparini had called their emergency number instead of the home phone, they immediately accepted his offer to come work at Jamesville-DeWitt High School. Yampage journalists were able to get a quick interview with Ryder, the human leader of the team, where he explained his reasoning for the very hasty acceptance of this new pursuit.

“I’m a ten-year-old boy living by myself in a mansion with six talking dogs. At least, I think they talk. My point is, I need a change of scenery. JD is just chaotic-er-judgement free enough that I could get away with taking up a real occupation with canines that speak.”

The pups are currently employed in different parts of the school that correspond with their specific skill sets as designated to them on Wikipedia. For instance, Marshall, the team’s firefighting dalmatian, is working as the school’s professional fire drill enforcer. Not only will students hear the fire alarms as they normally do, but Marshall will accompany the alarms with obnoxious barking and chase students to the exits. The school is still attempting to train him to only bark during fire alarms, and not every time the bell rings. They are also trying to teach him where the exits are so he doesn’t end up chasing students into the French classrooms so he can bark at the tacky pictures of puppies with the caption “mignon, non?” as he has done at least 2 times already since his hiring. Rocky, the team’s designated “recycling pup”, works with the environment committee in their fruitless attempts to get students to compost their leftover lunch food, and Skye, the team’s “aviator” is currently in training with famed local student pilot Will Guisbond, although neither Skye nor Guisbond wished to comment specifically on what this was in preparation for. “I can’t tell you, we’re keeping it under wraps right now,” Guisbond said. Two days later, Yampage journalists spotted Guisbond and Skye attempting to build an aircraft with a logo depicting a human hand shaking a dog’s paw. “Whatever you think this is, it’s definitely not a JD air force,” Guisbond told journalists.

Politely as we could, we asked Gasparini if the school could really afford to pay seven new members of the staff who seem to work so diligently and care so much for community service. “Of course the pups will be compensated for their work here at JD. I purchased over 2,000 dollars worth of Milk Bones™ from the drama department’s budget.”

Of course, not everyone at JD is pleased with the arrival of the patrol. “The white one with the black spots in the firefighter suit completely destroyed my sofa!” Mr. Hartley exclaimed. “They ripped my life-size cut-out of Matt Damon to pieces!” Ms. Myers-Kelly commented. “They destroyed everything…” Mr. Brodsky told Yampage, shaking and desperately clutching another picture of an eye drawn by a freshman. “This is all I have left. They ate my paper. They knocked over my lamps. They smeared oil paint all over the walls, they wrote in my 2B pencils, phrases like ‘no job’s too big, no pup’s too small’ and ‘ready for a ruff ruff rescue’. They mocked me. Everything is gone.” When asked about these disasters, Gasparini completely shifted the subject.

Josephine Dupuis - April 2, 2020 0
Later, we informed Mr. Blumenthal, the band director about this event. All he did was laugh and say, “Well, if they’re not going to practice those instruments, at least they’re taking steps towards being able to hold the things.”