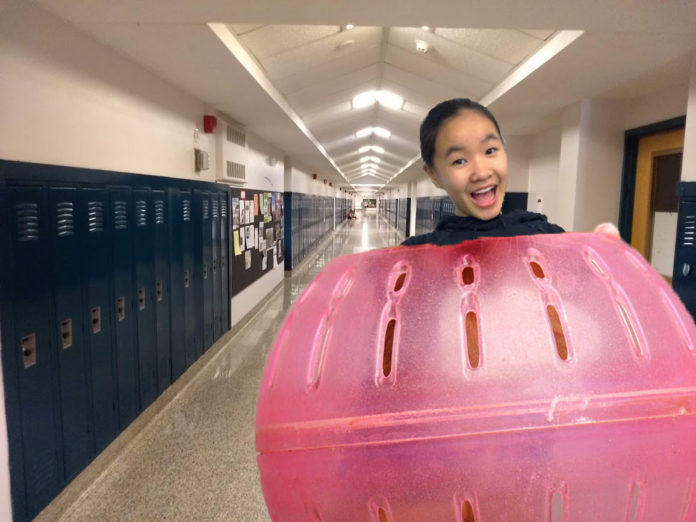 Before you invest in a mask collection as expansive as your shoe collection, we here at YamPage would like to inform you of an alternative that’s about to blow up at JDHS. Some may call them human hamster balls or even their correct name, Zorb Balls, but that’s not the point. These clear balls are about to take over the socially distanced fashion world of JDHS, so you’d better jump on (or rather in) one of these fashionable spheres as soon as possible.

Before we get to the recent news, we have to start from the beginning. We’re guessing that you are among the 85.78 percent of the student population (we’re excluding the 14.2 percent of students who somehow have remained utterly unaware of these developments) who claim that this all began just last week. But the truth actually lies within the remaining 0.02 percent of students. Unbeknownst to many, this all began during the second week of school by sophomore Connie Zhang.

Only the students and staff standing in the front entrance at precisely 7:32 AM saw as Zhang walked inside in all her bubb-ular glory. Why, you ask, did more not see Zhang throughout the school day? Well, the sad truth is that immediately after Zhang entered the foyer, she was swiftly escorted into Mr. Gasparini’s office to be “calmly dealt with.”

“The rules are simple,” Mr. Gasparini told us the day after this occurrence. “Students have to wear masks. We can’t have students walking around in giant hamster balls directly disobeying school rules! I calmly dealt with Miss Zhang and that was that.”

But that wasn’t that. Two weeks later, Mrs. Raicht walked into the school building sporting the same human hamster ball that had been so calmly dealt with earlier.

“As soon as it was brought to my attention by Con– I mean as soon as I discovered them completely by myself, I knew I had to jump on the opportunity,” Raicht told us. “What can I say, it’s a genius alternative to masks. Now students can see my face so I don’t have to worry about them taking everything I say seriously!”

When asked again if she had only stumbled upon these or had actually jumped on someone else’s bandwagon, she, too quickly, remained adamant of her own discovery, adding, “And how could I have? How can you explain the two-week gap between these two occurrences, one of which I’m totally unaware of? It’s a total coincidence the ball took two full weeks to ship from New Zealand.”

But why, you ask us, has Raicht gotten away with this while Zhang was calmly dealt with? Well, to put it simply, a fashion hierarchy exists here at JDHS, or in the red hall at least. Raicht is just more fashionable than Zhang will ever be. It’s just a fact.

As soon as Raicht wore her hamster ball that day, everyone, students and staff, knew JDHS would never be the same. While it may not seem like we’ve been hit with it yet, when asked if they’d purchased their own, approximately 82.7 percent of students and staff said they had, but are still waiting for theirs to arrive from New Zealand.

But let’s not forget about those remaining students. While a good 14.2 percent of students continue to have no interest at all in these proceedings (and when asked, stared at us confused as if we had just randomly started talking about turning into hamsters or something), the remaining 3.1 percent of students have joined together to form an organization called “Students Against Those Totally Stupid and Horrendous Hamster Balls”.

In an exclusive interview, the founder of this organization, Zhang, said, “I will and always will agree with Mr. Gasparini’s initial ruling. We can’t have students and staff moving about our halls and classrooms in human-sized hamster balls! It’s simply unacceptable! That’s why as soon as the packages arrive from New Zealand, my fellow members and I will be spending every waking school hour popping those stupid bubbles. Mark my words, this so-called fashion phenomenon will not last for long.”

We couldn’t help but ask Zhang for a further explanation of her hatred because, as we also reminded her, she had been wearing one of these balls only a few weeks prior.

“Does a woman not have the right to change her mind? Four weeks ago, I was naive, but now I am not. These hamster balls… oh forget it! These Zorb Balls, as they’re actually called, are unwelcome in our hallways. I don’t care if Heidi Klum walked into the high school wearing one and also, so kindly, forgot to credit the initial fashionista!” Zhang said in quite a huff. “Also, just so everyone knows, you can buy one on Amazon for Pete’s sake. I don’t even know where you’re purchasing them from that they’re coming all the way from New Zealand. Now, get that microphone out of my face!”

So, in a quick conclusion, if you’re behind on this new fashion phenomenon and still want to get in on it despite Zhang’s warnings, then as Zhang suggested, go to Amazon and order one now. Or as Mr. Gasparini would say, just calmly deal with your problem some other way.

Margret Tangerine - September 9, 2021 0
“When Fred found out there were no more turtle shells being shipped, he had a meltdown and resorted to the cheaper alternative, tortoise shells."