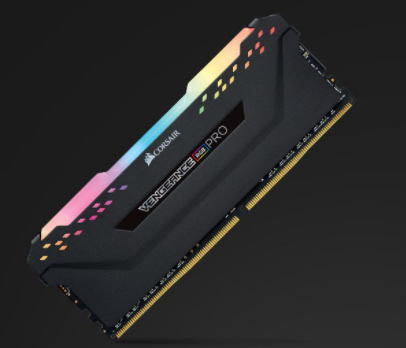 RAM (random access memory) is responsible for how many tasks can be running on your computer at the same time.  Many people interchange the words “memory” and “storage,” but this is a common misconception.  Memory is responsible for “memorizing” what you have open on your computer.  It’s essentially short-term storage.  Storage, on the other hand, holds things you don’t have open at the time, as well as the applications you have open.  RAM comes in the form of long, thin sticks, also known as DIMMs.  You never should buy one stick of RAM.  Although, if your motherboard has just two slots to insert RAM into, sometimes it may be convenient to buy one stick, because when you’re ready to upgrade to two, you can just buy another stick instead of a whole new set.  You always want all the same sticks in your system.  Don’t mismatch brands or sizes.  A sweet spot these days is 16 gigabytes of RAM.  This will be sufficient for most people’s needs.

A specification to look for is DDR (double data rate) type (DDR4 is the standard right now).  You should also consider frequency, measured in megahertz (MHz).  3200 MHz RAM is plenty fast and won’t break the bank either.  And finally, CAS latency.  A CAS latency of 16 gives you a perfect balance between price and performance.  The lower the CAS latency, the better, because it measures the number of clock cycles that pass from when an instruction is given for a particular column, and the moment the data is available (integralmemory.com).  It’s essentially a measurement of time, so you want it to be lower.  A decent 16GB kit of DDR4 memory will cost roughly $65.  Specifically, a nice budget kit is the $53 Team T-FORCE VULCAN Z 16GB DDR4-3000 CL16.  If you have a bit of a higher budget and want some tasteful RGB lighting, consider the Crucial Ballistix RGB 16GB DDR4-3600 CL16.  If money is no object, try the crazy G.Skill Trident Z RGB 64GB DDR4-3600 CL16.  Prominent companies that you can count on include Corsair, G.Skill, Teamgroup, Kingston/HyperX, ADATA, Crucial, and Patriot.

Storage comes in two main forms: hard drives and solid state drives (SSDs).  I’m sure you’ve heard of the classic hard drive.  But you may be surprised to learn that SSDs are significantly faster and come at reasonable prices.  You all know what storage is, and I’m sure you always crave more of it to store all your favorite applications and games.  Well you’re in luck, because it’s actually pretty affordable.  For your main storage drive to store big files, pictures, videos, your game library and applications, and more, you should get a hefty hard drive.  To boot into your computer as quickly as possible, you should get an SSD, which will have less space than your hard drive in most cases.  The faster your drive is, the faster you will boot into applications, and the faster data will transfer.  Hard drives are rectangular-shaped, and fit into cages in your PC case.

SSDs come in a few forms.  Standard SATA SSDs look just like hard drives, but are a little smaller, and also fit into cages within your system.  There are also M.2 SSDs that run at the same speeds as SATA SSDs, but fit into a compact slot on your motherboard.  These SSDs look kind of like RAM, but they’re even smaller and thinner.  M.2 NVMe SSDs are the sweet spot you should look for.  They are very fast, and look the same as the aforementioned M.2 variety, but they are much faster, and yet still attainable.  The fastest SSD type would be the PCI-e Gen4 SSD.  These are still relatively new, and very expensive, but if you can afford them, go for it!  These extreme SSDs also fit into an M.2 slot, but they take up PCI-e lanes nonetheless.

A solid storage configuration is a 2TB hard drive coupled with a 480-512GB SSD.  A good 2TB 7200 RPM (faster than the other hard drive speed of 5400 RPM) will go for about $55.  A decent 512GB M.2 NVMe SSD will cost you roughly $60.  For example, a nice budget hard drive is the Western Digital Caviar Blue 1TB 7200 RPM, at just $45.  A big step up that would keep your wallet content at the same time is an NVMe SSD like the $60 Crucial P2 500GB M.2 NVMe SSD.  An exorbitant performance king is the $180 Corsair MP600 Force 1TB PCI-e Gen4 NVMe SSD, which delivers top-of-the-line speeds.  Brands that are often deemed trustworthy in this space are Seagate, Western Digital, Samsung, Crucial, Silicon Power, Kingston, Sabrent, Teamgroup, ADATA, Corsair, and Gigabyte/AORUS.

How To Build a PC: Introduction