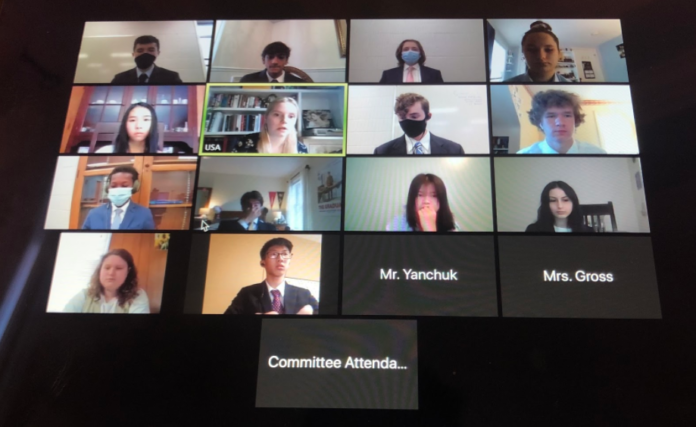 JDMUN will be hosted on May 8, and will be a training conference for 7th and 8th graders. For delegates in GA, UNEP, UN Women, and WHO, the process of MUN committees is very similar.

Committee will begin with the chairs taking quorum, or roll call. When your country’s name is called, you will want to say either “present” or “present in voting.” “Present” means you may abstain from voting, but if you say “present in voting,” you may not abstain.

Once a topic is set, the rolling speakers list (RSL) will automatically open. In the rolling speakers list, delegates will discuss the important points of the topic. This is a great place to show off the research you’ve done. The rolling speakers list is a good gauge of where delegates stand on a certain topic. You will be able to begin forming alliances with countries that agree with your stance. Typically in the RSL, delegates will be able to speak for 30 seconds, but will have two 30-second extensions. If the speaker’s time has expired, a delegate will have to motion to extend the speaker’s time. When a speaker has finished, they must either yield their time to the chairs of questions. Yielding your time to the chairs means you are done speaking. Yielding your time to questions means that delegates can ask you questions by saying, “point of information.” At any time during the RSL, delegates can make a motion to enter into a moderated or unmoderated caucus to further discuss the topic.

An unmoderated caucus is a time for delegates to speak less formally on the topic at hand. The delegate who motions for the caucus will have to set a length of time for the entire caucus. There are no speaking times, and delegates can discuss the topic in smaller groups as they work toward a resolution. No reason needs to be given when motioning for an unmod.

After several moderated and unmoderated caucuses, delegates will have completed writing a working paper with their group. A working paper is a draft resolution. Each bloc can motion at any time to present their working paper to the committee. Delegates can become sponsors or signatories of working papers. Sponsors are the delegates who contribute most to the paper, while being a signatory simply means you want to see the paper debated. Once the paper is presented, delegates can ask questions to the sponsors (main writers; up to four) of the paper, and there will also be a brief semantics period to fix any errors in the format or grammar of the resolution.

The goal of committee is to pass working papers as resolutions to the topic. Once all the working papers have been voted on for the topic, the committee will essentially be over. During closing ceremonies, awards are typically presented to delegates who contributed the most to their committees.

Crisis runs just like regular committees, except that instead of working to pass long resolutions, delegates will pass many shorter directives throughout the committee. These are formatted the same as resolutions, but they are generally shorter and more frequent. Passing directives is also much easier than passing resolutions, as far as presenting and voting goes. Once the chairs feel that the topic has been thoroughly discussed and solved, the topic will be concluded.

Delegates will use the “raise hand” feature to present a point or motion, as well as for voting. Delegates should remain muted unless called upon. Breakout rooms will be used for unmoderated caucuses. Delegates can remain unmuted during unmods. Delegates must have their cameras on at all times except when stepping away to go to the bathroom.

Points and motions (motions are in general chronological order)

Point of information = Question for a delegate

Point of inquiry = Question for the chairs

Point of order = Question about procedure of committee

Point of personal privilege = When you feel violated as a delegate by another delegate (personal attack), or you have to go and do something (this does not include going to the bathroom; you can just get up and go)

Motion to set the topic to_

Motion to extend the speaker’s time by _ seconds

Motion for a _ minute unmoderated caucus

Motion to do a for, against, and to the point speaker