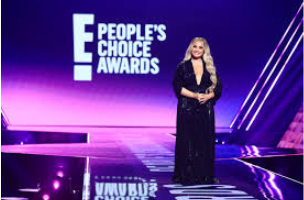 On Sunday, November 15th, the 2020 E! News People’s Choice Awards featured all of the most popular celebrities, tv shows, movies, and more that this year has had to offer. Despite the circumstances of the pandemic, E! did not fall short of creating a show that made viewers feel like the world was a little bit back to normal again. What makes the People’s Choice Awards so special is that it is one of the few award shows where viewers get to vote on all of their favorite nominees. It was a fun night filled with musical performances, celebrities, and more that all came together on one stage.

This year’s awards were hosted by singer and actress Demi Lovato who lit up the stage with her bubbly and electric personality. Although her audience consisted of thousands of fans watching from the comfort of their own homes through Zoom, she connected with them through the screen made it seem effortless. Her many wardrobe changes kept the audience on their toes and she certainly delivered with her elegant yet fun looks for the night. Without missing a beat, Lovato hosted the show with ease and charisma that was enjoyable to watch.

Among the big winners of the night, Tracee Ellis Ross took home the award for Fashion Icon and gave a touching speech about the legacy of her mother, Diana Ross, who she was inspired by her whole life. She also talked about how she is not afraid to take risks and think outside of the box, which is what she encourages her audience to do as well. The award for People’s Icon was given to Jennifer Lopez who strutted across the stage in a flawless little red dress. She got choked up talking about what matters most to her through this whirlwind of a year. Luke Perry received the award for People’s Champion and delivered a moving speech about how perseverance and determination can help you reach any goal you set your mind to. Other big winners of the night were social media icon and trendsetter, Emma Chamberlain as she won Social Star and Pop Podcast for her podcast “Anything Goes”. The quarantine hit “Outer Banks” won most Bingeworthy Show and “Grey’s Anatomy” won big in the Show of 2020 and Choice Female Actress with Ellen Pompeo after their seventeenth season premiered this week. And on the note of long-running shows, Ellen DeGeneres won her record-breaking 20th People’s Choice Award for Choice Daytime Talk Show. Many more popular individuals and shows took home awards in their categories such as James Charles, Ariana Grande, Justin Bieber, “Hamilton”, “Keeping Up With The Kardashians”, “The Kissing Booth 2”, and more.

The night was also complete with musical performances by Justin Bieber and Chloe x Halle. Justin Beiber blew the virtual audience away with performances of his song “Lonely” with Benny Blanco and “Holy” featuring Chance The Rapper. Although he was mostly alone on stage aside from a few band members, he did not have any background dancers to bring the energy, yet he did a spectacular job giving the crowd a great time as if they were there in person. Chloe x Halle also performed and although they are not as popular as Bieber, the R&B duo stunned the crowd with a jaw-dropping performance of their song “Ungodly Hour.”

All in all, despite the challenges of not being able to have a live studio audience, the E! People’s Choice was an unforgettable night. It was a true showcase of this year’s finest in entertainment and music.