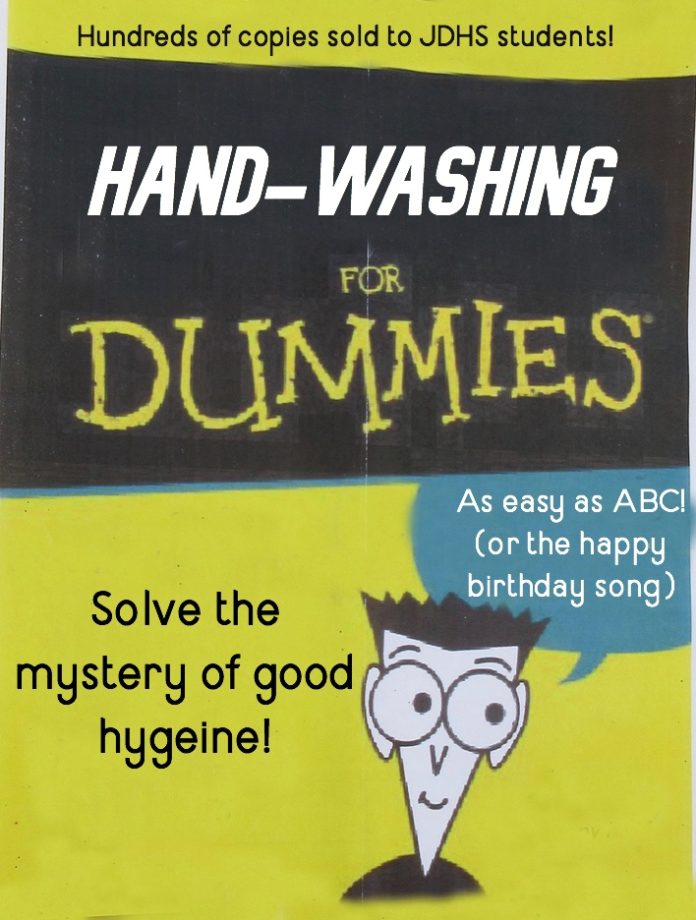 In their latest efforts to slow the spread of COVID-19, JDHS administration decided to present students in grades 9-12 with what they believed to be a highly informative and educational video entitled “How to Wash Your Hands” during the class assemblies. Unfortunately, they severely overestimated the intellectual capacity of the student body, and many students were left befuddled and perplexed by the complicated concepts detailed in the video. The effects have been far-reaching.

One student reported experiencing headaches after simply trying to comprehend the video, while several others were found curled up in balls on the floor of the auditorium hours later.

“It’s just… I’m just so confused. How do we… where should I… is there…?” said sophomore Meghan Culligan in a distressed daze.

Others were more hostile. “This is RIDICULOUS! How can they expect us to understand this stuff?? I don’t- ARRGG! I DON’T GET IT!” related an especially baffled junior Katie Donaghue, smashing a banana into the wall.

Indeed, it does seem outrageous that administrators would hit students with such challenging material during the very first week of school. To attempt to understand their reasoning, we interviewed Mr. Nylen, assistant principal, “We truly meant no harm to the students. It was our best intention to present them with engaging and informative material that would challenge their intellect. We had no idea it would go over this way.”

The situation grew dire when senior Essex Glowaki was found to have mistakenly glued his hands to the wall while attempting to perform the procedure in the red hall bathroom. He will continue to sleep standing up and be fed granola bars at three hour intervals until authorities can determine how to properly remove him from the wall.

The video has also wreaked havoc on the self-esteem of many formerly well-regarded students. “Sure, I’ve gotten a five on all 17 of my APs, but I’m starting to question if it even means anything,” said a depleted senior Nathan Chen. “If I couldn’t understand the video… I think I’ll just join the circus.” In fact, a collection of students were seen already preparing their circus routines during a Zoom call. This was actually quite entertaining until the part with the lions.

Still nobody has actually been able to comprehend the content of “How to Wash Your Hands.” Even Science Department Chair Mr. Keenan, who was believed to be all-knowing, reported having difficulty understanding the complicated hand-washing steps. “I kept getting lost between ‘lather’ and ‘scrub’.”

Some students however, are determined to overcome the intellectual challenge presented by the notorious video. Sophomore Nora Gross was seen showing off her freshly-purchased copy of Hand-washing for Dummies in the lunchroom on Tuesday, while junior Lucy Heflin reportedly dropped out of AP Bio in order to self-study a course in hand-washing.

J-D Represented at the Tokyo Olympics