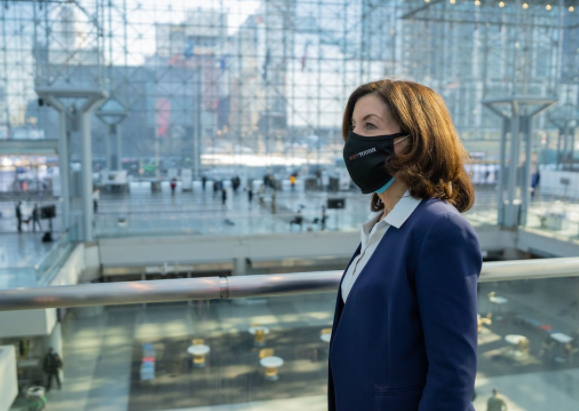 After Governor Andrew Cuomo’s resignation from office amidst the allegations of inappropriate behavior, Kathy Hochul, originally Lieutenant Governor, took the oath on August 24, 2021, becoming the first female to govern New York. While many New Yorkers are unsure of who she is, Hochul has been involved in politics for a long time. Hochul’s past experience includes serving as an aide for former Congressman John LaFalce, former Senator Daniel Patrick Moynihan, and she even ran for Congress in 2011 shortly before running alongside Andrew Cuomo and succeeding in 2014.

Kathy Hochul was a member of former Governor Cuomo’s team from the years 2014 until his resignation. She is described as being the total opposite of Cuomo, as she applies political good will and established borders. On the day of Cuomo’s resignation, Hochul issued a statement saying, “It is the right thing to do and in the best interest of New Yorkers.” She also stated, “As someone who has served at all levels of government and is next in the line of succession, I am prepared to lead as New York State’s 57th governor.”

Hochul has stated that her starting goals are to decrease the spread of the pandemic and invest in infrastructure and provide relief for New Yorkers. So far, she has made progress on several key issues. She began the state’s $2.7 billion rent relief program, and she announced on September 3rd that the New York Department of Labor will distribute 850 million dollars to help over 90,000 New Yorkers who lost money or their jobs over the pandemic and did not qualify for other benefits. Hochul believes that this is a vital first step for supporting the workers who “stepped up when the pandemic hit and kept New York moving forward.”

Continuing onto what she has done so far, the governor has issued a universal mask mandate through the Department of Health, has taken action to increase COVID-19 vaccination rates, and has pushed for creating a recreational marijuana industry to generate “much-needed revenue for New York.” Moreover, Hochul has required state government training on sexual harassment and ethics to be done live instead of “allowing people to click their way through a class.”

Following her first two climate crises in New York, Tropical Storm Henri and Hurricane Ida set record high rainfall levels in New York City and caused severe damage to some areas, Hochul met up with officials to discuss future preparations and responses for these natural disasters. She visited hard-hit areas, discussed relief programs, and spoke to victims. However, she received an abundance of criticism in how she handled the situation.

On the other hand,  Founder of Metropolitan Public Strategies, Neal Kwatra, applauds her self-assurance and competence, stating that she has done well so far. John Kaehny, Executive Director of Reinvent Albany, a nonprofit good government group, draws a clear distinction between her and Cuomo, stating that she has settled as a “normal” governor, not one who engages in drama. Others state that while she has years of experience to keep her afloat, she still has a steep learning curve to face.

As the 2022 New York gubernatorial election on November 8th approaches, her decisions are a tremendous factor in regards to whether Kathy Hochul will remain our Governor.

The 2019 Budget and School Board Vote

From High Schools to Hospitals: Other People Matter