By Scottie O’Brien and Spencer Schultz 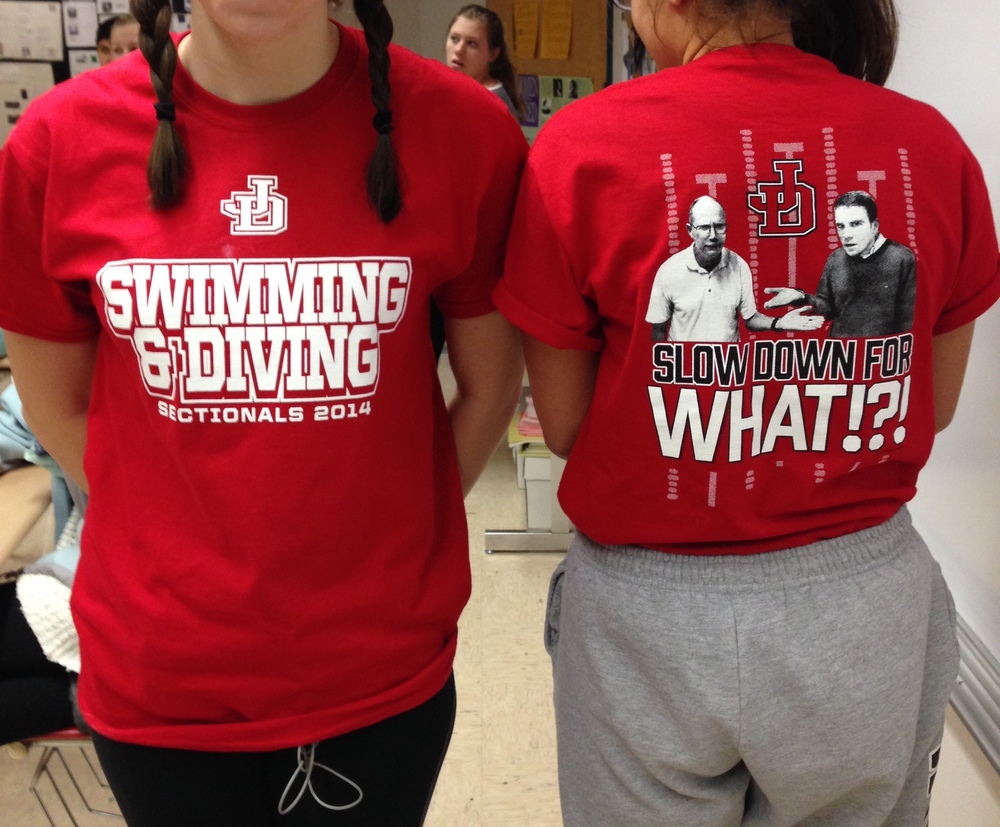 The Jamesville-DeWitt Varsity Girls  Swimming and Diving team had high hopes this season to stay undefeated after plowing over powerhouse swimming programs such as Christian Brothers Academy, New Hartford, and Oswego. However, their talent was tested in a close meet against section rivals West Genesee, on Oct. 8. The competition ended 97-89 with West Genesee coming out on top.

The loss to West Genny was the only one this season. The defeat upsets many of the swimmers, yet they realize the loss will only benefit them in the long run. “I think our loss makes us a lot more excited and motivated to beat them at sectionals,” says sophomore Katie Salvo. “The loss hurts, but I think we’re better than that team, so it doesn’t really matter because we’ll most likely beat them in sectionals,” says senior Maria Bussone; “that was just the first test to see how we compare to them.” According to Bussone, the real test will come at sectionals.

Now that the team’s aspiration to be undefeated has been destroyed by West Genny, the J-DHS squad is more focused on coming out on top during sectional time, says Salvo and senior captain Hayley Schultz. If the team can win this year, it will be the third year in a row that the J-DHS girls have won the Section III swimming title. “We all want to win the title again, because we would be that much closer to having a dynasty,” says Schultz.

Although almost half of the team has qualified for sectionals, not one swimmer has achieved a state qualifying time thus far in the  season. However, the team still strongly believes that J-DHS will send multiple relays and individual swimmers to states, says Bussone. Bussone believes Schultz will return to states in the 100 breaststroke. “She works so hard, so I know she’s going to be number one in the state,” says Bussone.

Sectionals were held for the diving portion of the team on Saturday Nov. 1 at J-D Middle School. Four divers from the J-DHS  team placed in the top 10 in the meet. Junior Anna Skandelis and junior Hannah Gunther came in eighth and fourth place, respectively, while sophomore Megan Alkins was awarded sixth place and senior Jess Rieger came in first place overall, qualifying for states. Rieger demolished the school and pool records for diving, by a whopping 40 points, with a score of 431.50.

The astounding 11-1 record and the large portion of swimmers who have qualified for sectionals proves that Head Coach Bob Bewley and Assistant Coach Matt Lowery must be doing something right. “The coaches help us improve our strokes, and help swimmers become more efficient,” says Salvo.

But the help from coaches goes far beyond the physical aspect of swimming. “A huge factor in becoming a great swimmer is very much your mentality and if you don’t have a good mentality then that can hurt your times,” says senior Captain Hayley Schultz. “We get really nervous before events so the coaches helped us learn techniques to calm us down before races,” adds sophomore Marissia Potamianos.

Most swimmers on the team also credit their success to the support from fellow girls on the team. “We pump each other up before meets” says Salvo. The swim team agrees that the support definitely helps the swimmers do well. Swimmers also help each other during practice and push each other to do better. “We get into groups and swimmers with more experience help the swimmers that don’t have as much experience with technique and advice,” says Salvo. The swimmers hope that  taking the role of being second coaches in the pool can translate into success during sectionals.

Although coaches and swimmers alike helped each other improve, problems still persisted with the team. “The team is not good at controlling their emotions; we have to keep our nerves in check. We just get too nervous sometimes, and we need to focus on that,” says Bussone.

Some of the swimmers also think that the team chemistry is an aspect that can be worked on. “We didn’t really do much team bonding. We have to be more like a team, we can’t be separated within the lanes,” says Potamianos. “The team was divided between people who really were dedicated to the sport and wanted to get in the pool, swim, and work hard, and then people who didn’t necessarily care as much,” adds Schultz. “Everyone saw the separation and it was bringing down the work ethic of the entire team.”

Schultz and other members of the team offered a clever solution to combat this issue. The team decided to spread out the lanes during practice so the harder working lanes would swim next to the lanes that did not put forth as much effort. After a week of swimming practices in this method, the overall work ethic of the team improved, according to Schultz. “I think it really helped the determination of some swimmers rub off onto other swimmers that were lacking it,” says Schultz. “ Parker believes that it was a good way for swimmers to get to know each other better. “It didn’t fully solve the problem, but it definitely improved the team, and increased our chances of winning sectionals,” says Schultz.

The Section III swim meet on Friday, Nov. 7 at New Hartford High School will be an important one, as it is a chance at redemption against West Genesee, and also a final attempt for the J-D girls to reach the state meet.

Double Down Does it Again