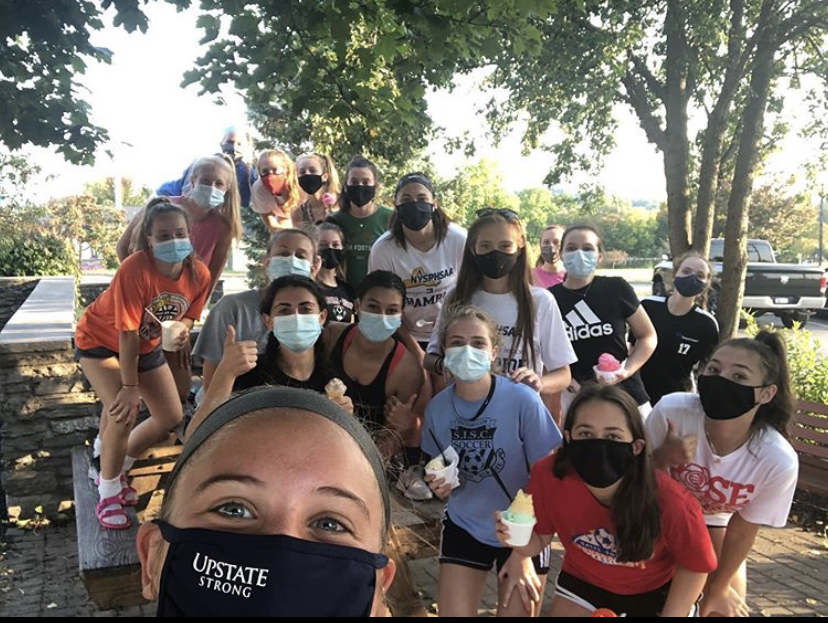 The 2020 Jameville-DeWitt girls soccer season was already going to be difficult. They had seven starters graduate last year, which meant they were losing a lot of talent and leadership. The alterations to the season due to COVID-19 added even more complications. Despite facing a difficult set of circumstances, the Red Rams are ready to play some great soccer this year.

Losing so many seniors left several holes, both in talent and leadership, on the roster. Luckily, the current seniors have stepped up to fill their place. “We have five senior leaders this year on the girls soccer team,” coach Hayley Nies said. “They have done a great job motivating and keeping the team focused.”

The leadership from the seniors is much needed this year, as the team will face many talented teams this year. “Our schedule this year is one of the strongest schedules I have seen,” Nies said. The Red Rams will face Balwinsville, Fayetteville-Manlius, and Liverpool, all of which are out of league games.

Another challenge the team will face this year is wearing masks during games and practices. “It makes it difficult to breathe after long periods of time, which makes us tired quicker,” said junior Alice O’Connor. “Because of this, we aren’t able to stay at as high of an intensity as we were before.” Although it is difficult, the team is adjusting well and making the best out of a tough situation. “The girls have reacted remarkably well due to the changes with the COVID rules.  They are getting used to wearing their masks during practice, we do take breaks when necessary.”

The sectional tournament for this season was cancelled, so the team won’t have a chance to win their 12th straight sectional championship. However, J-D is as motivated as ever to succeed. “I don’t think the cancellation of sectionals has heavily impacted our team.  I think everyone is happy to be out on the field together playing soccer again,” said Nies. The players seem to agree. Junior Sydney Balotin said “Our main goal right now is to take it game by game and work on our team. Hopefully we can win as many games as possible.”

The Red Rams open their season with a home matchup against Auburn this Tuesday, October 6th.

Indoor Track and Field Teams Prepare for the Postseason