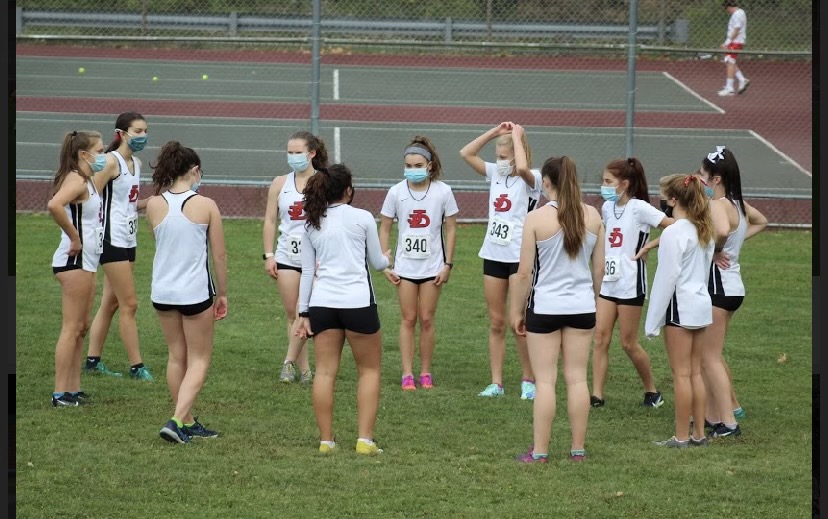 Following an early delay due to COVID restrictions, the J-DHS girls cross country team eventually started their season. The shortened season has imposed new challenges for the runners.

“Starting out a season with so little training is terrifying. We had a late start which delayed time to prepare for races, especially our first one,” said freshman runner Nikki Militi.

The team was only allowed 12 runners in their meets. Thus the team decided to bring the top 7 all around runners on the team to every race, and the other runners would switch in every other meet. This strategy only promises some runners 1 or 2 races out of their 5 total ones this season. The runners who weren’t competing performed time trials of the race on their own and reported times to their coach after the race. Freshman Meghana Reddy, who ran the time trial for the first race explained, “It’s the same course as if you were racing, and is used by the coach to see your time for the 5k JD course. Racing competitively is better, since you have motivation to pass people on the opposing team. When I ran competitively this season versus when I did the time trial there was a noticeable difference.” Many runners, along with Reddy, prefer to run competitively in the races , but the time trials are bearable.

As much as the pandemic has affected the other sports, it hasn’t made a drastic change on the J-D girls meets so far. Senior Jillian Kordas, who is also one of the two captains on the team, said, “For our first race, there were separate boxes for each team to stand in at the starting line, which is different than it has been in the past. We had to wear masks at the start of the race just until we separated from people. We also always do a cheer huddled up together, but we couldn’t do that unfortunately.”

As much as Covid hasn’t affected all aspects of their meets physically, there’s been an impact mentally. Since Covid, they’ve had to combine the JV and Varsity teams. This change created challenges and confusion in their first race, but freshman Nikki Militi had a different opinion. “Experiencing my first varsity race was already scary enough in this pandemic,” she said. “But honestly I think I had it easy this year. If I was walking in without this pandemic running varsity as a freshman and going against 3x as many girls I wouldn’t be in the right mindset or do nearly as good.” Militi is one of the top 7 girls competing in all meets this season.

“This pandemic, as crazy as it sounds, maybe made it better for us this season,” said Militi.

Typically the girls cross country team attends anywhere from 10 to 14 meets, including states in Manhattan that would be “the highlight of the season.” Unfortunately, it isn’t taking place this season due to the world pandemic.

The runners are obviously very dismayed about all these cancellations. As senior Jillian Kordas puts it, “It’s hard with the safety guidelines and missing out on all of the fun things we’d usually do, but were making the most of it.” The runners are overall just happy to be able to have a season and compete this year.