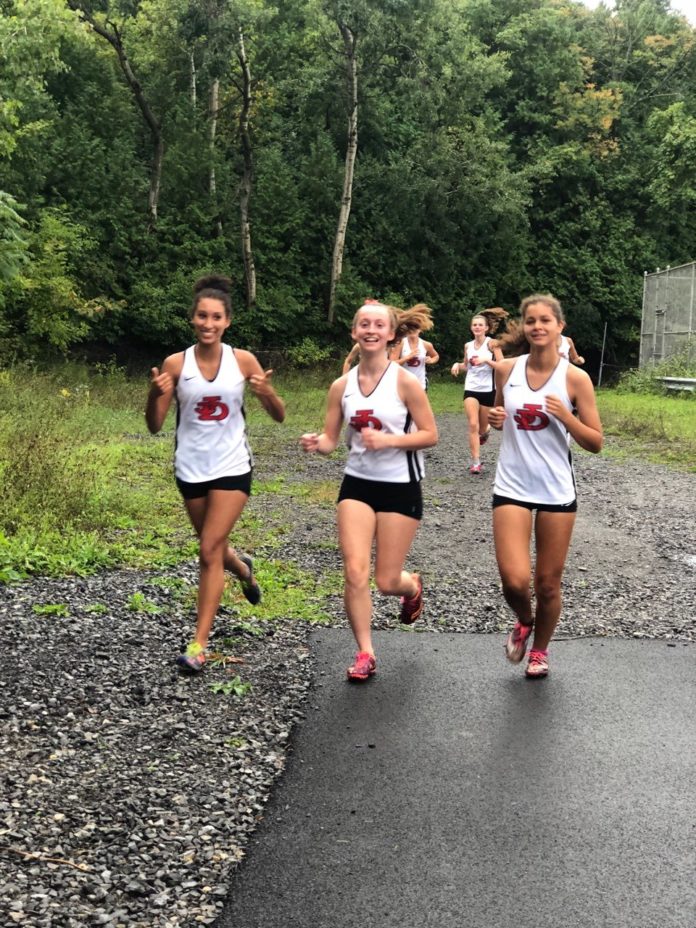 By Sydney Balotin and Elsa Hardt

This season, the Jamesville-DeWitt High School Varsity Girls Cross Country team is getting a sweet taste of success. They are undefeated after competing in five meets, dominating in their invitational and league meets.

Making it to sectionals last year was a huge success for the girls.  “It would be hard to [do] better than winning sectionals like we did last year,” says Coach Jim Lawton who has high hopes for a two-peat.

With Christian Brothers Academy joining the class B schools, J-D added another rival to their season. Senior captains Samantha Aitken and Sophia Vinciguerra use their new rival to push the team to work even harder. They try to go the extra mile to make a good atmosphere for all the girls. “You are running by yourself, but you can’t score by yourself. You score as a team and succeed as a team,” said Aitken. Both captains try to possess the same positive energy as their coach.  “Everyday Lawton is encouraging us to do our best and catch the girl in front of us,” said Vinciguerra.

With a loss of 10 seniors after this season, Coach Lawton is hopeful that the team will be equally as successful next season.  “I am optimistic that several of the underclassmen will continue to improve and be the strength of next year’s team,” said Coach Lawton. It won’t be easy, but both Vinciguerra and Aitken have said that underclassmen Maddie Foss, Miriam Zoghby, and Rachel Gao have really stepped up their game during the meets and hope they will continue to impress through sectionals.

The Varsity Girls Cross Country team hopes to continue their undefeated streak with only three meets remaining in their season. They also hope that their hard work will reward them with a place in sectionals.