RamPage
Home Archive The Mr. JD Competition Is Right Around The Corner

By Chloe Drescher and Bora Nanaj 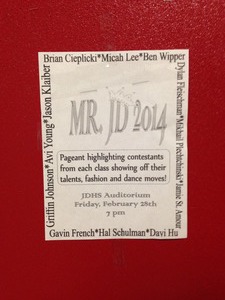 Don’t call it a comeback, but the Mr. J-D contest is back and better than ever. After a four year absence at Jamesville-DeWitt High School, the 2014 student government has decided to bring the male beauty pageant back. There are four portions of the competition including a talent portion, formal wear, a choreographed dance including all participants and a pageant style question. Four teacher judges will score the contestants and ultimately decide the winner. The winner will get a crown and special benefits at J-D Day such as free tickets and getting to skip the lines. The Mr. J-D competition will be held on Friday, Feb. 28 in the J-D auditorium. Tickets will be sold for $5 during all lunches Feb. 26 through the 28. They will be $8 at the door.

This year, three students from each grade were chosen by fellow classmates to compete. “We sent ballots out to all the homerooms,” said Slate vice-president Maki Mandelis. “People voted, and we tallied them. The three people with the most votes got in.” The freshman class chose Gavin French, Hal Schulman and Dayi Hu to represent them while the sophomores chose Dylan Fleischman, Mikhail Plechtchinski and Jamie St. Amour. Of the juniors, Brian Cieplicki, Micah Lee and Ben Whipper are competing. Seniors Griffin Johnson, Jason Klaiber and Chris Wood are also in the running for the title of Mr J-D.

The contestants are very excited about being in the show. “I remember seeing the show when I was in eighth grade, and I always wanted to bring it back. I’m really pumped to be a player in the show this year,” said Johnson. Klaiber, Fleischman, French, Hu and Whipper all said they are excited about competing in the pageant. “It’s an honor to participate in such an event,” said Cieplicki.

The contestants have put a lot of time into preparing for the dance. On top of practicing their talents on their own, they attend after school sessions to practice the choreographed dance.

“We practice the dance and talk about how everything is going to go during the show,” said French.

The talent portion of the show stands out to most contestants. “I think it will be fun to show off my talents,” said Whipper, even though he is unsure about what he will do for the show. There will be a variety of talents among the contestants, from impressions to rapping and showing off some dance moves. French said that he is planning to yoyo while Klaiber will be doing impressions. Many of the other contestants would not disclose their talent for the show because they want the audience to be surprised.

The students, as well as the contestants, are excited for the show. “I can’t wait to go to see everyone’s talents,” said senior Max Havens. Senior Zack Hatem agrees with Havens, saying “I went to the competition when my brother was in high school so I’m excited to see it happen with my own classmates.” Senior Samantha Mignacca looks forward to a few contestants in particular; “I have a huge crush on Micah and Jason, that’s why I’m going.” Sophomore Stephanie Naples will be an attendance because it will be really entertaining. Freshman Matt Cappelletti said he will attend because he wants to support his friend Gavin. Junior Jake Binder and sophomore Tyler McKee are both excited to go. “I’m excited to see what the contestants have to offer,” said Binder. Junior Cortney Vaughn hopes the acts will be funny and interesting.

Slate advisor Meghan McGee has high hopes for the competition. “The last group that did it was amazing, so they have a really high bar that they need to reach,” said McGee, “I hope they can meet those standards.” This particular slate brought back Mr. J-D since the current student body has never seen it before.

J-D Mock Trial is Far from a Joke