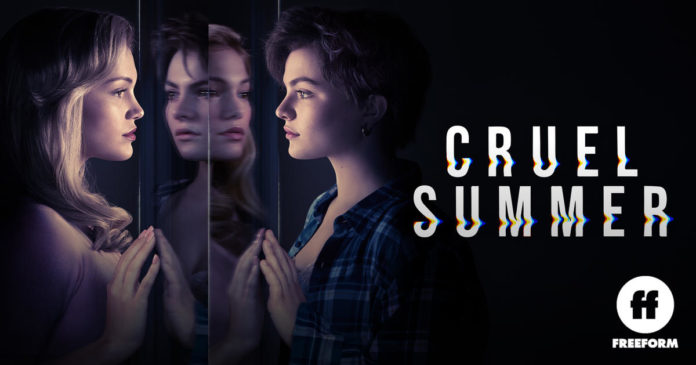 The Freeform original show, Cruel Summer, is the perfect thriller tv show that also combines elements of a classic high school drama. The story is told along three different summers through 1993-1995 and follows Jeanette Turner through the trials and tribulations of high school. However, Jeanette’s high school experience takes a turn for the worse after the school’s it-girl, Kate Wallace goes missing. Jeanette strives to be exactly like Kate, so she sees her disappearance as the perfect opportunity to get everything she has ever wanted and more. When Kate is found alive in the summer of 1994, she accuses Jeanette of seeing her held captive and the story makes national headlines. This changes Jeanette’s life for the worse when she is all of a sudden the most hated person in the country. The controversy leads to lawsuits, lies, and broken relationships as everyone picks sides and chooses what to believe is the true story.

The contrast between characters and their relationships that develop and change over the course of the three years is just one of the elements that makes this show so unique and interesting to watch. The show stars Olivia Holt as Kate Wallace and Chiara Aurelia as Jeanette Turner who are polar opposites between the popular girl who everyone wants to be, and the nerdy girl who wants to be her the most. Jeanette’s closest friends in 1993 are Mallory and Vince who battle through wanting to trust their best friend, but also noticing changes in her behavior that question everything they thought they knew. Of course, a love interest is needed in every dramatic tv show and that is where Jamie Henson comes in where he turns from Kate’s protective boyfriend into unloyal when his girlfriend goes missing for months with no warnings. The most interesting part of the show is seeing the jump between each character changes and not exactly knowing why until you watch more.

Cruel Summer is guaranteed to keep you on your toes with unexpected twists as the story of Kate Wallace’s kidnapping unfolds more and more. For myself along with many other viewers, I did not want to stop watching because I simply needed to find out what was going to happen. However, some parts of the show were frustrating because it is told throughout multiple years, making the sequence of events out of order. Those watching know more about events that have happened in the future as well as how they can be prevented and who to believe, than the characters in years before which was hard to watch sometimes because it was easy to get annoyed with the characters for making wrong choices, that they did not know at the time. Although this element to the show was not ideal to some viewers, it was definitely a smart choice from a director’s standpoint because it makes viewers even more invested in the story.

Overall, Cruel Summer is a must-watch for anyone who loves a good thriller and will keep you hooked until the very end. The elements of a seemingly normal high school town combined with the secrets everyone has kept makes it impossible to not enjoy.