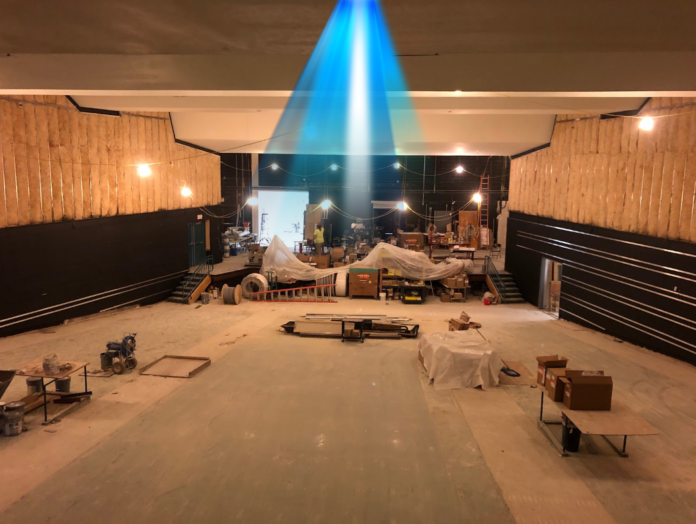 DeWitt, NY — It felt like ages, for many, after waiting for the new high school auditorium to be unveiled. From collapsing roofs and loud, randomly timed drilling noises, to the presence of construction workers since what feels like 2015, it’s now finally open to the public.

The new facility, garnered with state-of-the-art sound and lighting equipment, has caught the eye of many, including António Guterres, Secretary General of the United Nations, who said it was simply “the best auditorium in the history of the world.” That’s certainly something we should be proud of.

However, after receiving several anonymous tips from our dedicated readers, YamPage has begun to drill into a story that Guterres seemingly overlooked — the mystery of the blue light. It began when the Jazz Ensemble and Show Choir groups were rehearsing late into the night, where they witnessed random flashes of blue light within the auditorium. Seeming to be the result of faulty light system wiring, the groups carried on. It wasn’t until the light returned during musical rehearsal and the National Honor Society induction ceremony that students began to take notice.

Unfortunately, just as many began to take notice, they also went missing. Since mid November, we’ve confirmed two missing student reports, supposedly being sucked away by the entrancing blue light. Pyramid scheme or not, the DeWitt police are in full investigation-mode to determine the whereabouts of our beloved peers. Until they are found, we can only wonder why this is happening — is it aliens? Could it be the ghost of Ren McCormack from the 2017 production of Footloose returning to strike his revenge on act II? Or maybe, in a twist of fate, it’s our Italian overlords, seeking justice for their stolen tiles, now laden throughout our building’s bathrooms.

Regardless of the source of this uncanny magic, we must remain vigilant. In times of terror and fear, know that YamPage is your light — we will be here, reporting on the good, and the bad. Until then, stay safe out there, and if you see a mysterious blue flash, just hope that it’s just the lighting crew playing a silly trick on you.

Françoise von Farquaad - February 7, 2020 0
“I haven’t blinked in days,” stated sophomore David Scibilia who didn’t even bother to look up from his Tamagotchi the entire time he was being interviewed. We found David hiding under the staircase by the trainer’s office. Only days after we interviewed him, David lost his Tamagotchi when he blinked for the first time in almost a week. Scibilia later sent out invitations for his Tama’s funeral.