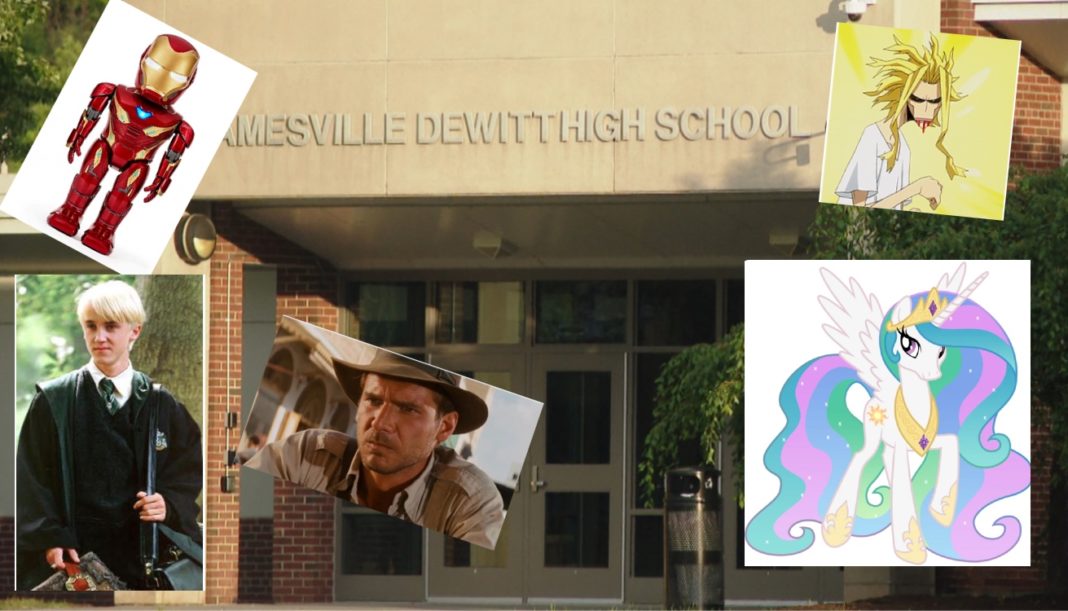 J-DHS has seen many strange things in the past few years. But what happened at the high school last Friday might be something to put in the history books. When students went to class that Friday, they found that their teachers had been replaced by fictional characters from popular media, despite a substitute shortage.

Everyone was anticipating a normal Friday—a nice end to the week with as little homework as possible. However, when students entered their first period classes, they were met with the surprise of a lifetime. Characters they’d been seeing all their life—characters they thought were fictional—had replaced their teachers. Students in Mrs. Eaton’s English classes were met instead with Obi Wan Kenobi (Star Wars). Mr. Ormond’s students were taught by Professor Sprout (Harry Potter), and all of the science teachers were replaced by the variations of Peter Parker (AKA Spider-Man). Chaos erupted in the art rooms when Indiana Jones (replacing Mr. Brodsky) accidentally set off an avalanche. Mr. Gasparini himself was even replaced by none other than Tony Stark (Iron Man), which made for a series of very interesting announcements. The counselors were replaced with characters like All Might (“My Hero Academia”), Bella Swan (Twilight) and Princess Celestia (“My Little Pony”). Draco Malfoy even taught (he replaced Mr. Cline).

“I couldn’t tell if it was a dream or a nightmare—seeing all my favorite characters in one place. I can’t believe Medusa and Percy Jackson didn’t start fighting in the hallways!” said Ash Brown. Another student reported that seeing childhood favorite characters caused a flood of nostalgia, and they were unable to do most of their work. Parents wondered how on earth this had happened, especially after the fuss about a lack of substitutes for classes. Freshman Jihad Atieh wondered, “How long is this going to last? I’d really like to get Dumbledore’s autograph!”

Atieh brings up a good question—how long are these replacements going to last? And what does this say about the multiverse? Is this a rip in the space-time continuum, or just a mass hallucination? Or maybe it’s some kind of forbidden technology the district came up with in an attempt to hire subs? Most importantly, are students allowed to take pictures with their new teachers?

All together, it was a very confusing yet welcomed change in the schools. Is this the expectation for when teachers are sick? If not, when will these characters be back, if ever? Can we expect our parents to become Hamilton characters next?

Digby Thanoscar - May 27, 2020 0
If you were lucky, you made it to the final part of pre testing. Hours twenty one to twenty eight known as the Twilight Zone by the board itself. Here one would undergo a rigorous amount of mental challenges to prove they were capable of taking the test. I did not make it here and the ones that did are too traumatized to talk about what occurred. We can only imagine what went on in there…