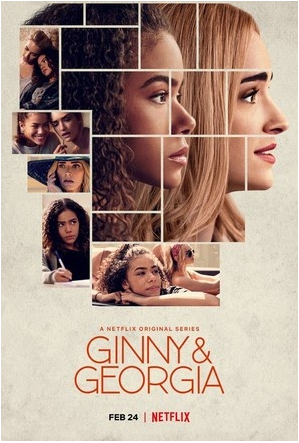 In mid-February, a new show geared towards teens hit screens across the country via Netflix. The purpose of this show, “Ginny and Georgia,” was to allow viewers to relate to situations they may find themselves in today. While there were many good aspects of the show, many viewers found themselves unable to look past all the race issues in the show regarding a racially mixed main character. The scriptwriters of the show are currently under fire for normalizing microaggressions and blatant racism against black people.

Before getting into all the wrongdoings, it’s important to point out that there were many good aspects of the show and many issues that were correctly represented. For example, Ginny’s best friend in the show, Maxine, was a lesbian character who was comfortable with her sexuality. The show shows the struggles of not being a straight person in today’s society, including situations such as reading the wrong signs when it comes to romantic relationships. This was an important aspect of the show because not only does it have an LGBTQ main character, but it’s one that’s sure and comfortable with their sexuality, which many teen shows don’t have. Many other people were represented along with people of the LGBTQ community. Some examples include one of Ginny’s friends who is struggling with body dysmorphia and Ginny herself with self-harm. The show points out important mental health issues that are sometimes ignored because of the sensitivity of them. The show also dips into teen pregnancy with being a single mother and correctly represents Maxine’s family with a deaf father. Many viewers think the good done in this show still isn’t enough to ignore the bad, but it’s important to keep in mind that the writers weren’t completely oblivious on some topics.

When the show first starts, sophomore Ginny Miller has just moved to a new town in Massachusetts with her mother and brother. Ginny grew up with little presence of her black father who left her to be raised by her white mother solely. This leads Ginny to struggle with her image as a mixed person and causes her to only ever hang out with white friends. At first, this doesn’t seem like an issue until it’s shown that Ginny has ignored and avoided the black girls that have tried befriending her at her new school. This ultimately leaves viewers to think Ginny is ashamed of her race and that by only hanging out with the white kids, she believes people will forget she’s black. This led many parents to criticize the show, highlighting that their children of color shouldn’t have to feel like they need to be ashamed of the color of their skin and only hang with the white kids.

Another huge part of the show that critics are slamming the writers for is all of the race-centered microaggressions (indirect, subtle, or unintentional discrimination against members of a marginalized group) used towards Ginny by her friends that she doesn’t do anything about. This is contradictory to Ginny’s character as she is supposedly the same person who called out her new English teacher on the first day of school for having mainly white, male authors’ books on the reading list. Some of these microaggressions she played off as “funny” so she wouldn’t be judged by her white friends. An example would be when one girl asks her, “What are you?” and calls her “exotic looking.” She goes from an outspoken young woman to someone who can’t even have a conversation with her friends about the things they say. In this way, microaggressions towards black people are being normalized and young girls watching aren’t seeing the issues with it.

Arguably the most talked about part of the show that became a huge embarrassment for the writers was the scene known as the “Oppression Olympics.” This scene was a fight Ginny and her Tiawanesse boyfriend had about, you guessed it, who’s more oppressed. Not even adding how disgusting it is for two people of a different race to argue about who has it harder, the things said towards each person are awful. Ginny brought up the point that her boyfriend Hunter had it easier because he was Taiwanese and his skin showed white, so he was “more white than she would ever be.” The show completely disregards Asian oppression and in the script, nothing was said to counteract this.

Another thing that was highlighted during this scene was the disregard towards the struggle mixed people go through, especially when it’s stated that Ginny isn’t even “that black” because she is light-skinned with a mixture of white features. Hunter also goes on to use common black stereotypes against her, like how she doesn’t have naturally curvy features or know how to rap. Hunter makes many comments about her appearance and questioning her blackness that make Ginny ashamed. This leads her to think she needs to fit into one category or the other; that she’s not white enough to fit in with the white girls and not black enough to fit in with the black girls.

The entire argument, which consists of stereotypes to prove who’s whiter, is very chaotic as it highlights the idea that you’re somehow less black if you don’t know how to twerk or less Asian because you don’t know Mandarin Chinese and your favorite food is a cheeseburger. It’s almost as if the writers were saying racial identity is something two biracial characters “should” be struggling with, and instead of showing how they are struggling with it, they just put this scene in the script and had them throw derogatory stereotypes at each other.

The main cause for criticism and backlash against the writers of the show was for not keeping race in mind when it came to the main character. Because of this, many were left to think that Ginny was being used as a token black person rather than actually highlighting her struggles. Instead of casting a powerful young black woman as the main character to make girls like her feel empowered, it just shows Ginny struggling with her identity and not sticking up for herself when she’s being oppressed.

It seems that the writers got ahead of themselves when trying to include representations of everyone. They wanted to make the show represent minorities and common issues; they wanted to make everyone feel seen. It shows that the writers had good intentions, but just didn’t quite hit the mark. Many think that when you’re writing a show about the struggles a particular minority group goes through, you should have someone of that minority making sure it’s being done in the correct way. Of course, everyone is entitled to their own opinion.

All in all, the show doesn’t engage race the way it needs to because it’s so determinedly stuck on the white gaze. To be of color is more than the struggle of being a person of color. It’s more than oppression, racism, discrimination, and more than microaggressions. Small parts of this are factored into the show, but not enough to look past all of the transgressions.

The D’Amelio Family Gives Fans a Behind the Scenes Look Into...