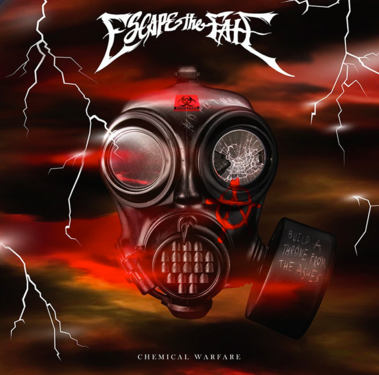 American metalcore/post-hardcore band, Escape The Fate, released their seventh album, “Chemical Warfare,” on April 16, 2021. Since then, it has been getting mixed reviews from nearly all major reviewing websites which chose to write about it. In my opinion, this is by far the worst album Escape The Fate has ever produced. The lackluster lyrics mixed with the repetitive chords and electronic style made for a very uninteresting experience for the listener. Sadly, the disappointment doesn’t just stop at the music. The cover art for this album looks like a seventh-grader on Fiverr was paid to photoshop a post-apocalyptic scene. In addition to this, the merchandise to go with this album is flat-out strange. One design depicts a rectangular skull with “Escape The Fate” written three times over it in red text. Although it may be a good choice not to put the album art on anything, this is somehow much worse. Overall, there are very few good aspects of this album.

The album opens on one of the stronger songs, “Lightning Strike.” The guitar riff at the beginning of this song reminds me a bit of the opening to a surfer movie—not what one would expect from this band. The lyrics are nothing special; there aren’t any lines that are “quote-able” and the guitar solo in the midsection of the song is fine, but once again nothing special. Nothing in this song is memorable, and that sentiment remains throughout the rest of the album.

The second and third songs on the album, “Invincible” and “Unbreakable,” are two out of the three songs on the album I would listen to. “Invincible” features violinist Lindsey Stirling, however, she does not play a major part in the song. This had the opportunity to be a great experimental song while preserving the classic Escape The Fate style, but they were unable to capitalize on this opportunity. The only real highlight of Sterling’s performance is found at the 2:30-minute mark where she gets a lackluster, slow solo. “Unbreakable” also fits in the bearable category because it doesn’t try to be something it’s not. It isn’t trying to preserve the hardcore genre Escape The Fate is famous for, rather, it’s just an upbeat pop song. The biggest problem with this album isn’t that it leans into the pop genre; it’s the fact that Escape The Fate is trying to combine two or three unlike genres. While I respect the courage in trying something new, there is also a point when you have to realize it isn’t going to work, and they failed to recognize this point.

The other songs on the album are generic both lyrically and melodically. They aren’t memorable at all and feel like they were made specifically to be filler songs. This grouping includes the album’s title song “Chemical Warfare.” I mean, it’s not a bad song—I’m not mad at it—but it’s just another song. The title songs for albums should have a type of magical spark that gets listeners excited for the rest of the album (they’re generally in the first five tracks of the album), but this song fails to provide that.

Unfortunately, there weren’t any draw-dropping songs on this album. The closest we get is the song “Walk On,” which I believe should have been the album’s title song. It’s acoustic yet exciting, similar to “The Only Exception” by Paramore. It has a great message about depression and mental health, all while maintaining the album’s overarching theme—moving on. However, this is by no means a song you can jam out to at 2 a.m. in a McDonald’s drive-through. I was really hoping that there was at least one song on this album I could consistently jam out to, but there wasn’t one.

I hope Escape the Fate makes a clearer choice in the future. I don’t care if they choose to go into pop or go back to their metalcore roots—they just have to choose. They cannot continue this strange assortment of genres and expect to see success in the future. Overall, I rate this album a 1.5 out of 5.