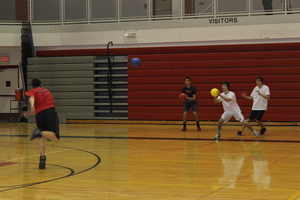 There’s a new sport under intense scrutiny, and the Jamesville-DeWitt School District is at the center of the conflict. There is pending litigation against the district stemming from a dodgeball incident at J-D Middle School in January 2013 that left a child with a severely disfigured nose.

The Post-Standard reported that a substitute teacher was leading a game of dodgeball during physical education class when a child with autism barrelled into another student, Yong Seong Cho. The collision left Cho’s nose tilted to one side and altered the size of his nostrils, his father told the Post-Standard; doctors have recommended that reconstructive surgery be avoided until Cho reaches adulthood, as any interference before he finishes growing will only cause more issues.

The Post-Standard reports that Cho’s parents are seeking over $30,000 to cover medical bills and up to $300,000 in compensation for the disfigurement. Cho’s father was quoted in the Post-Standard calling dodgeball a “dangerous” game that “needs to be stopped.”

A similar collision-based dodgeball injury was sustained during the 2014 dodgeball tournament fundraiser on March 8. In one of the matches, senior Nick Street sustained a mild concussion that occured when fellow senior and teammate Stuart Fiacco’s knee slid full-speed into the side of Street’s head. The Streets do not plan to pursue any legal action, and Nick has not missed any school as a result of the injury.

Most notable in both injuries is the fact that neither was sustained as a result of the game of dodgeball specifically. They both occurred as a result of presumably unavoidable collisions at high speeds and did not relate to dodging, catching or throwing a ball. “Any activity where people are playing hard- whether it’s dodgeball, basketball soccer, tennis, badminton, anything- anybody can get injured in any class where kids are moving at 100 percent effort,” J-D High School physical education teacher Emily Rowles affirmed.

While the Cho incident occurred during class at J-DMS, J-D High School P.E. teachers are confident that it would never happen during any P.E. class on Edinger Drive. “We have the option for kids in our class to sit out [if they don’t wish to participate],” explained P.E. teacher Jeff Ike; “We have options for everybody while the game’s going on to keep everyone safe.”

Students who are not interested in participating in dodgeball activities are encouraged to walk on the indoor track in the main gym. The majority of the P.E. courses available for selection to non-freshman students do not include dodgeball as an activity, save for a few instances when a teacher is absent and their class goes to the “Team Games” section taking place during the same period. Even under those circumstances, participation in dodgeball is never mandatory. “You don’t have to play if you do not want to play,” Mrs. Rowles stated; “There’s no penalty if you choose not to play.”

Dodgeball is most prevalent in the male-dominated “Team Games” classes at J-DHS. In these courses, dodgeball is not a main activity that a unit is based around. Instead, it’s a seldom-played warm-up game or something students vote to play during free time at the end of the school year.

Students who partake in Team Games do not want to see dodgeball abolished in light of the recent slew of injuries, particularly because the injuries did not stem from dodgeball-specific interactions. “You could be walking down the hall and have a collision,” said senior Morgan Sawyer.

“Dodgeball is life,” said junior Adrian Autry; “It’s the best game ever. I’m pro-dodgeball. Never end it. It’s not American if you end it. America is all about fun, and dodgeball is the best thing ever.” “There’s a lot of worse things that could be going on than playing dodgeball,” said junior Nick Koulouris; “The ball didn’t even hurt [Cho]. You can watch what you’re doing and be careful and be safe.”

Senior Luca Pelligra pointed out that J-DHS recently added new metal hockey sticks for use in floor hockey. “The metal ones hurt more than the [old] wooden sticks,” Pelligra said; “We’re buying these things that hurt more, but then [potentially] taking a sport away [in dodgeball] that has an equal chance of [injury].”