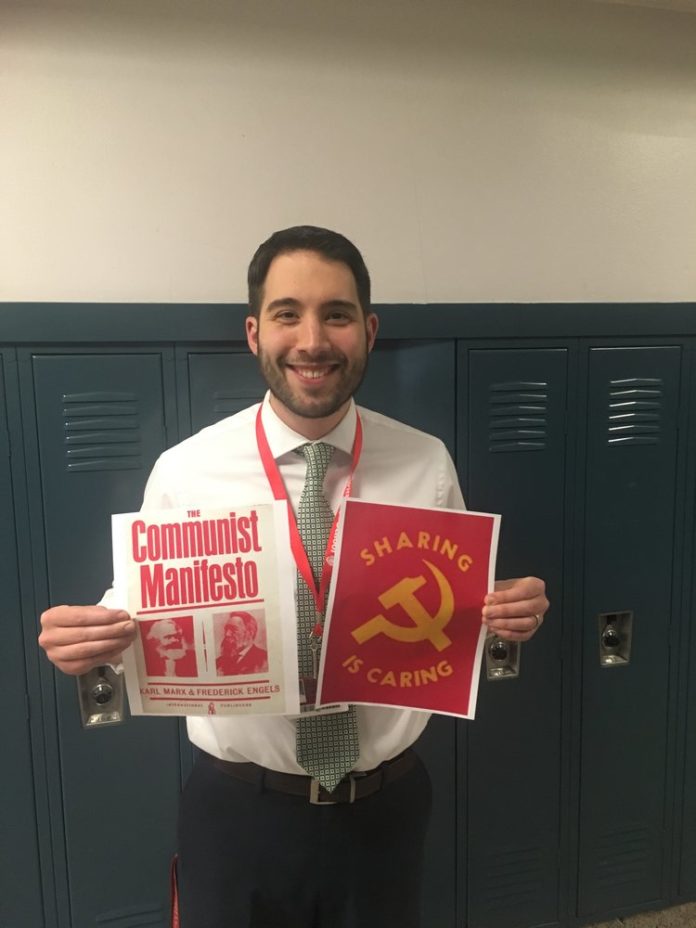 DeWitt, NY — After breaking expectations, hearts, and at least two pieces of real medical equipment, last year’s show ‘John Lennon and Me’, also broke the two-year pattern of vignette-based shows, so drama show director Mr. Jordan Berger wanted this year’s show to have similar success. “I figured people liked the idea of a longer show, and they liked the idea of a historical figure playing a key role- so naturally, I searched far and wide for a full-length show that would meet the criteria,” Berger said in an interview. Alas, there was no such show that satisfied these requests that the JD Drama Club could afford to acquire the performance rights to- but Berger was struck with inspiration.

“He came to me at exactly 2:16 in the afternoon, with a 320-page script in one hand and stacks of communist propaganda in the other, asking if I would help him with a new project of his involving the Drama Show this spring,” commented World History teacher Ms. Rice. “He wrote an entire play based on the life and struggle of famed communist revolutionary Vladimir Lenin, and reached out to me to be his historical consultant for the show.” After Yampage staff journalists asked her about the rumors surrounding her involvement with the production, she denied these claims, but did express that she wished Berger and the Drama Club best of luck in producing their show, and that she’d be glad to provide any distraught actors in need of understanding their text with HAPP analysis.

In addition, Rice wasn’t the only “comrade”, if we may, to be approached by Berger with a request for their expertise. “I was just finishing my unit on personality when he (Berger) stopped me in the hallway with a 320-page script in one hand and a large poster with the phrase ‘the way to crush the bourgeoisie is to grind them between the millstones of taxation and inflation’ in the other,” psychology and history teacher Mr. Law told Yampage journalists. “He asked me if I would provide some psychological insight into Lenin’s personality, and I immediately agreed. Lenin was most certainly an INTJ, one of the rarest personality types, really- people who knew him described him as sometimes moody, but very passionate revolutionary leader- the INTJ type is nicknamed ‘the mastermind’ for a reason.” However, when asked whether or not he would be aiding Berger with the show, Law dismissed the idea. “The idea of having a 3 hour show about Lenin is torturous- not necessarily because of the length, but because it’s stretching Vlad’s personality far too thin- a personality like Lenin’s is much better encompassed in a production of crash-course video length. Really, anything is far better encompassed in a production of crash-course video length,” Law stated.

After taking a look at the script ourselves, we noticed there were very few roles- fewer than a drama show at JD has seen before. The cast includes the title character, his wife and revolutionary Nadezhda “Nadya” Krupskaya, and Karl Marx, who serves both as the narrator of the show and as Lenin’s conscience throughout the show. We interviewed several members of the Drama Club for their opinions on the extremely small cast. “Cutthroat? Who said cutthroat? That’s an awful way to describe it. Cutthroat makes it sound stressful and anxiety provoking. I’m totally relaxed about it”, senior Sofia Liaw said in an interview, while crushing a freshly written research paper on Nadya Krupskaya in her fists. “I’m not even in Drama Club,” freshman Max Oppedisano commented. “And yet seventeen different people have come up to me, some literally begging on their knees, pleading for me to  ‘please, please, please audition’, that ‘the Drama club may not have enough boys for this production’, even though there are only three characters, that ‘it doesn’t matter’ whether or not I can act, and that since JD would never cast a girl as a guy, that they might resort to casting the same rescue dummies they used in last year’s show.”

At the end of our interview with Berger, he left us with this interesting, yet horribly ominous final statement as he stared into the eyes of Lenin, now hanging as a poster in a gilded frame on his classroom wall- “The government is tottering. We must deal it the death blow at any cost. To delay action is the same as death.”

DISCLAIMER: The real Mr. Berger would like audiences to be aware that this article is purely satirical content.

Student Who Got a PS5 for Christmas Targeted by Both Students and Staff: A True Crime Story

Josephine Dupuis - June 17, 2020 0
Find the most uncomfortable chair in your house, get your family members to cram in next to you, find a track of just babies crying for an eternity, and hunker down for your realistic flight.