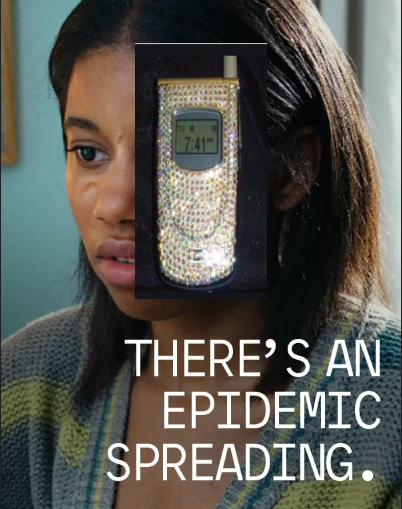 “My mom took mine away from me,” said senior Abby Morgan.

“Oh, I do it all the time,” said junior Isabella Avramov. “I do it on my shirts, on my shoes, on my binders, on my lunch trays…”

Bedazzling is back under a new name, and some say it’s more dangerous than ever.

“It’s called jeweling,” Officer Pienkowski said in an interview. “Students have acquired these flat-backed crystals and have taken to completely covering their clothes in them. It’s disgusting and quite démodé, but these kids are doing it to try and seem cool to their peers.”

Yampage journalists managed to interview one of the school’s most notorious jewelers, Rainer Yaeger, as he finished jeweling the cuffs of his jeans. “They come in a bunch of different colors, but the most popular ones are cappucino, grape, and tobacco. Even those aren’t as popular as the two that got banned, though.”

“The mint and mango colors proved to be extremely dangerous, so we had to ban them,” explained school nurse Laura Williams. “We’ve had students come in so jeweled that you can’t even see their faces. It’s unbelievably addicting, those colors. These jewel manufacturers pick them specifically to appeal to these kids.”

Even after banning the most popular colors, JD’s jeweling problem continued to spiral out of control.

“They can’t focus in class,” biology teacher Ms. LaTray told interviewers. “They’re always jeweling in the middle of my lessons.”

“Jewels are expensive,” commented frequent jeweler Mena Coles-Carruthers. “So we’re starting to see the rise of a black market for cheaper jewels, and sometimes you can find the mango ones there, too.”

Previously, students who didn’t want to be penalized for their jeweling in class began signing bathroom passes out to go jewel. However, JD has cracked down on this as well by locking all of the bathrooms.

Posters with the extremely effective slogan “Don’t Jewel, Not Cool” have been hung up in all school bathrooms. Unfortunately, these words of wisdom have not been able to reach any jewelers due to their location.

Digby Thanoscar - January 31, 2020 0
These protests were not taken kindly by Mr. Phillips and the rest of the RamFeed crew. They somehow got inside information that this was happening, and staged a counter-rally. This included around eighty students who were required to participate for a grade supposedly equal to a test. Mr. Phillips will not confirm nor deny this.