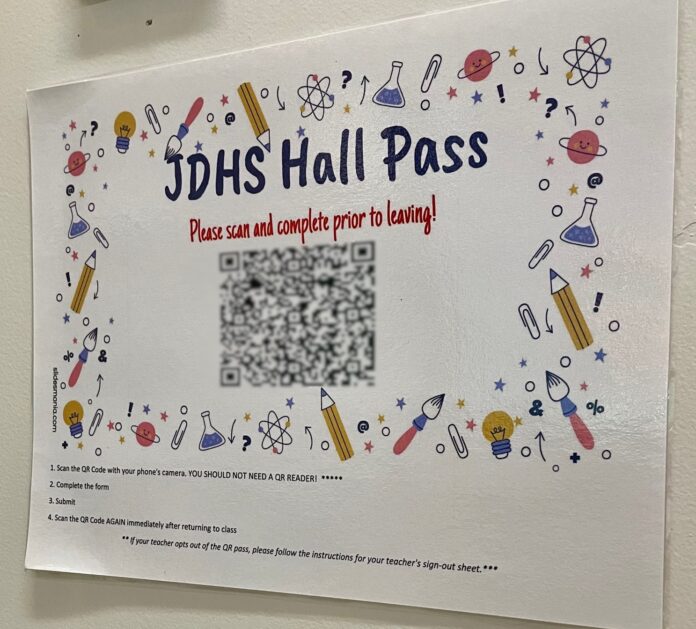 With the commencement of the 2022-2023 school year, high school administration announced that students would now sign out of classes using a digital hall pass. Each classroom now has a QR code posted on the door, which takes them to a Google Form they can use as a sign-out. Most classrooms also have a traditional sign-out sheet an alternative option.

According to Administrative Intern and Assistant Principal María De Jesús, “A digital hall pass is an option for a traditional sign-out sheet. All students being one-to-one with Chromebooks makes it an easy choice. It’s also less paperwork for teachers to keep track of. The most important thing with both passes is safety – we need to know where students are in case of an emergency. The digital option makes this faster and more convenient once you figure out how to work it.” While it is difficult to scan QR codes on Chromebooks, students can access the link to the hall pass Google Form in their homeroom Google Classroom, or scan it on a smartphone.

There have been concerns by students regarding the privacy of tracking their devices through the halls. However, De Jesús notes that the administration does not track students’ devices directly. “[Using the digital hall pass] doesn’t track a device. If a student is genuinely concerned about what is happening, I recommend leaving the phone in the classroom once heading out. You also can use the link from Google Classroom rather than the QR Code, with no phone involved.”

While most students are not opposed to the digital hall pass, there have been numerous technological issues with the Google Form over the first few days of school. “To date (September 11), the pass has been successfully used 225 times. However, I do believe it’s a bit of a user error for some. You need to be working with Chrome – Gmail app or browser. You need to be signed in to your J-D email. You can scan the QR or click the link posted to [your homeroom teacher’s] Google Classroom,” says De Jesús.

The reaction from students has been mixed, with many preferring paper hall passes due to the fact they’re easier to use. Senior Nathan Warren-Faricy states, “It’s a good idea; I just wish they weren’t so finicky. By the time I actually get signed in and everything, I might as well have just used the paper copy. From an administrative standpoint though, it makes sense.”

Senior Hannah Fuchsberg explains, “The digital hall passes I feel are too complex and too much of a hassle. In order to leave the class to go to the bathroom or fill your water, to have to load a QR code, and then troubleshoot if it doesn’t work, and then to have to do it again when you return seems like a lot of work to leave the class for a minute or two. Additionally, when the QR code doesn’t work and then you have to explain to your teacher it doesn’t work, it not only is taking more time but now is disrupting class. I feel like the non-digital hall passes worked better.”

The administration is working on reaching out to students to ensure everyone knows how to properly use the digital hall pass. In the meantime, De Jesús reassures students that paper sign-out will remain an option for the foreseeable future.