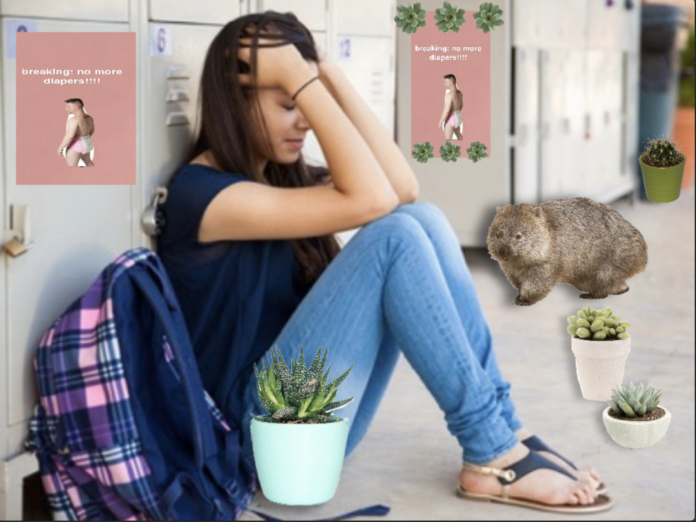 As we all know, supply chain issues are a huge problem in the world. But just like every major catastrophe, it affects J-D more than it should. Supply chains are getting increasingly backed up and shortages are at an all-time high. Or low. Anyway, nobody seems to be aware of the drastic measures that soon may need to take place.

As we all know, there is a huge shortage of adult diapers in the bathrooms. As an attempt to lower the baby formula deficit, adult diaper distribution has been put on hold, which has devastating complications for the bathrooms here at school. “I’ve had to use the sanitary pads instead! It’s horrible. Nothing is normal anymore. My will to live has been sucked out of me. I just want my diapers back. You don’t understand how much I need them,” said freshman Alyssa Forgione.

The bathrooms aren’t the only things that are deeply affected. The new “First Aid for Choking” signs that are replaced every few eons are trapped in their warehouse, maybe never to see the light of day. In preparation for the highly anticipated signs, the old ones had already been taken down. This was a grave mistake, because the signs also served as protection wards from wombat attacks. Survivor Lucas Chiorini had much to say on the topic. “It was terrifying. I hope the new signs are here soon because I can’t do that again. I had to schedule so many therapy appointments. Wombats are much scarier than you’d think,” Chiorini told YamPage.

As the toilet paper slowly disappears from the stores, string is vanishing at an alarming rate from J-D. All throughout the school, string of all colors and textures are simply leaving classrooms. It’s like a ghost working on a crochet project ran out of yarn and is raiding everything. There’s no string left anywhere in the building. Junior Tara Pollock tells us, “It’s so odd. I use string so rarely but now that I need it for random stuff, it’s annoying. I just want to make my English presentation and I need some dang string!”

While the world is in turmoil over the lack of curtains, some things did safely arrive. J-D made a huge order of succulents (specifically Selenicereus, Echeveria, and Mammillaria) earlier in the year. Hundreds of plant nurseries all around the country went into full growing mode to fulfill the order. It took three months, but finally, the succulents have arrived. No thanks to the supply issues. Now, the hallways are flooded with flowering fairy castle cactuses, spiny sempervivum, and promising parodia rudi-buenekeri. It makes learning a bit more stabby, but overall, it has been a great result of the failing supply chain.

Margret Tangerine - June 16, 2022 0
Many are outraged by the issues being caused by those that cannot properly handle the sugar packets. Others are upset the sugar packets are getting a bad name from those who don’t know how to use them.