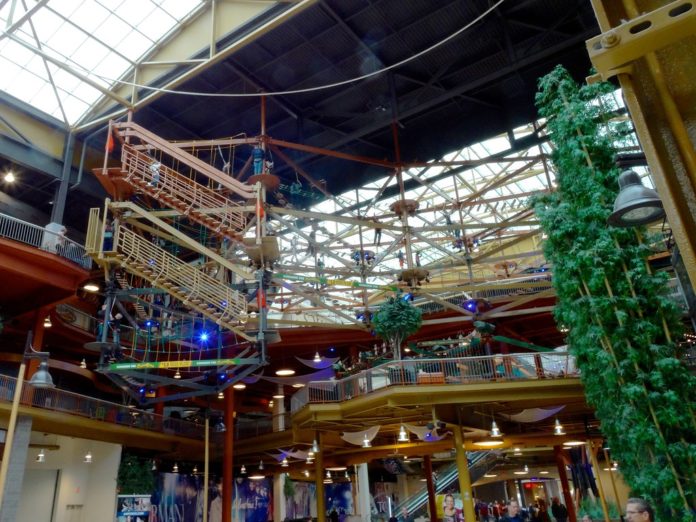 Syracuse’s mega-mall, Destiny USA, is in trouble. The mall has not been profitable for a few years and Destiny’s parent company, Pyramid Management Group, is facing $715 million in debt due to Destiny USA. According to a recent appraisal, the sixth largest mall in the country is now only worth $203 million thanks to the downswing in retail, compared with a $710 million appraisal in 2014.

Pyramid is now looking into restructuring its debt so it can save the famous mall. According to the law firm they hired to do so, “The company plans to continue to implement cost control procedures, negotiate revised terms on its debt service requirements, and rely on capital contributions from the partners, which are at the discretion of the partners and uncertain in nature, to cover any cash flow deficiencies.” Three ratings agencies have decreased Destiny’s rating to their lowest ratings possible, meaning they believe Pyramid will not pay their debt.

Destiny USA has produced Pyramid’s greatest loss in revenue of all of its New York malls, despite its Crossgates (Albany), Palisades Center (West Nyack), Galleria (Poughkeepsie), and Walden Galleria (Buffalo) all losing between 40% and 70% in value. According to Bloomberg, U.S. malls fell an average of 60% in value in 2020 due to payment struggles, defaults, or foreclosures. Even Mall of America, the largest mall in the country, experienced a $500 million loss in valuation after the owners missed three months of debt payments.

Destiny’s business slowed down years before the pandemic arrived, and now with the pandemic, the mall looks and feels empty. Casualties in recent years include Sports Authority, Sears, Bon-Ton, J.C. Penney, Lord & Taylor, Michaels, and most recently, Best Buy. Most available storefronts are still occupied, but many of the large anchor stores have closed. In early-to-mid 2020, Destiny was actually forced by the state to close down for four months, which took a chunk out of potential revenue for that year. According to a Destiny financial statement, rent revenues from tenants in the Carousel Center portion of the mall (the original part) declined steadily from $55.6 million in 2015 to $32.2 million in 2020.

However, it’s not all bad news for Destiny. If the mall changes owners, it could see a comeback if properly managed. Additionally, taxpayers are not on the hook for the mall’s debt, so shoppers may see little change. Tourism and jobs have suffered due to the mall’s peril, however, and this could continue as the mall spirals downward.

Destiny USA did not respond to RamPage’s request for a statement.

Pyramid’s crushing debt includes $430 million in mortgages (Pyramid has so far only made interest payments and not actually paid back the debt), $9 million in deferred payments due to the pandemic, and $285 million to the local government. Even if Pyramid went into foreclosure on Destiny, the debtholders still might not be paid. Due to hefty interest, it’s expected Pyramid’s debt on Destiny USA will only increase in the next few years, which could very well spell the end of the beloved Destiny USA.