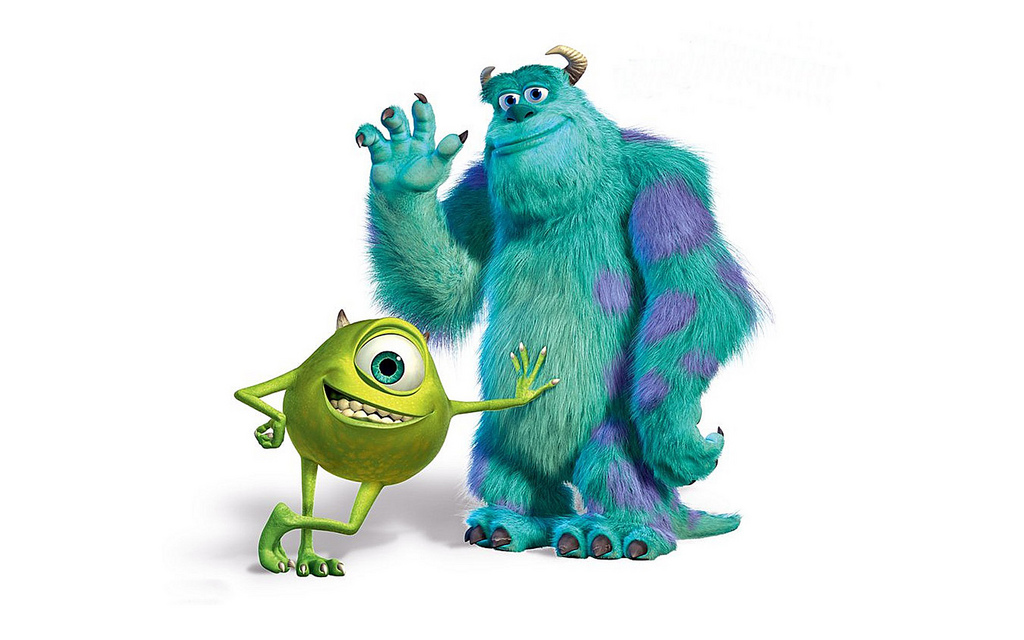 Science fiction is a genre that deal with imaginative content such as futuristic settings, futuristic science and technology, time travel, parallel universes, and extraterrestrial life. Through storytelling, writers of science fiction stories and films are allowed to criticize our current society. On November 2nd, 2001, Disney released Monsters, Inc., a Pixar film directed by accoladed Pete Doctor, to theaters across the United States. The animated motion picture, starring the popular Billy Crystal as Mike Wazowski and a praised John Goodman as James P. Sullivan, takes place in the dystopian Monstropolous. Monsters who utilize the screams of scared children as energy to run the society populate the dystopian city. In Monstropolous, the government imposes upon the monsters a mentality that criticizes any interaction with humsns. Sullivan and Wazowski work for the company that collects the screams of children, Monsters, Inc., scaring the children by entering their rooms through their own closet doors. Mike and Sullivan encounter a human, Boo, and decide to nurture her in Monstropolous before sending her back to the human world. In the process, the empathetic monsters are conscious of being caught by a suspicious co-worker, Randall the Chameleon, and their boss who shares the same motives as Randall, Mr. Waternoose the crab. The science fiction film Monsters, Inc. applies the science fiction elements of taking place in a dystopian setting, talking monsters, as well as including advanced technological strategies in pursuance of condemning racist attitudes that exist within our modern society while simultaneously complementing those who neutralize analogous affairs.

Those who contributed to the creation of the 2001 film Monsters, Inc. wisely used elements of science fiction in order to shame our current culture’s attitudes. The bashing of prejudice and racist attitudes that sadly exist within the human environment is primarily evident through the setting of a parallel universe. Prejudice and racism go hand and hand. One who is prejudice is one who develops a pessimistic attitude towards another individual or group of persons, particularly an individual apart of some sort of ethnic group, is racist. In the film, the monsters who work for Monstropolous refrain from interacting with humans because the entire public population accepts them as “extremely dangerous.” In effect of these psyches, the monsters obtain a racist and prejudice demeanor by prohibiting themselves from encountering the human race because a superior power tells them not rather than rejecting them for a logical reason. The notions demonstrated by the population of Monsters parallel the actions of the majority of Caucasian Americans in the mid-20th century United States of America. In the duration of that time period, the white Americans showed extreme racist and prejudice attitudes towards African Americans because practices of that time reflected that behavior, such as Jim Crow laws. African Americans were seen as inferior to Caucasians, commonly being treated as lower-class. For instance, public schools nationwide containing whites and blacks became segregated and the caucasian schools tended to be superior in their conditions and teaching quality. Through the use of a dystopian setting, the screenwriters of Monsters, Inc. enabled themselves to castigate the unfairness of racism and prejudice that exists in modern society.

The Pixar film Monsters, Inc. implements aspects of science fiction to express gratitude towards those who stand against racism in modern society. The movie captures this statement by utilizing two talking monsters, Mike Wazowski, a short, green, one-eyed individual, and James P. Sullivan, a blue-and-purple-polka-dotted-furred creature. The two characters discover a human, whose species is prejudicially shamed upon throughout Monstropolous. The pair of empathetic characters take the child, Boo, into sanction despite comprehending the risk of tarnishing their image if their containment of the innocent child is exposed to the public. A comparable event has ensued in world history with the aid of Dr. Martin Luther King Jr. and Rosa Parks in the Civil Rights Movements. The purpose of their peaceful endeavors was to grant equal rights to soles that were not born into the Caucasian race, resembling the actions of Wazowski and Sullivan to nurture Boo as if she was their own species. After years of determination, the African American race received equal rights as their opposite race. While fairness was in place, citizens had trouble accepting equal rights. The use of talking monsters aiding an unwanted individual within Monstropolous authorized the creators of Monsters Inc. to motivate people on this Earth to take a stand against injustice issues in which they disagree.

The application of parts of science that are unrealistic in the motion picture Monsters, Inc. entitles the storytellers to put forth an element of science fiction of advanced technology in order to comment on a current affair that plagues our world: slavery. A victim of slavery, a slave, is a person who works very arduously without proper payment or appreciation. Those who are subject to slavery occasionally experience acts of racism and prejudice which others enforce upon them. Slavery is a familiar issue that has existed in our own country in the 19th century and prior. Likewise, slavery is existent throughout contemporary society. The recurring concern is highlighted in the film by way of gaining electricity for the city of Monstropolous. Monsters, Inc. employs hundreds of monsters who inhabit Monstropolous to fetch unknowing children’s closet doors from a large storage facility. The door is then brought to a monster’s station, allowing the monster to strut in and scare the harmless human. The frightened bellows of the child are collected without the child’s say and used for it his or her’s superior powers’ well-being, which corresponds with the unethical results of slavery that remain to prevail in contemporary mankind. Furthermore, it goes without saying that the hollers of the children encapsulate the horrors of the barbarous conditions associated with slavery. The sounds of screams are commonly associated with malicious acts of humanity. In comparison, the conditions of slavery are some of the harshest humans have ever endured, where physical, verbal, and mental abuse all exist.

The creators of Monsters, Inc. execute an exceptional undertaking in shaming modern practices of our time. The makers qualify themselves to do so by incorporating elements of science fiction, such as exerting a dystopian setting with talking monsters who use progressive technology. Through the use of principals of the genre of science fiction, dishonor can be granted upon modern society’s continued use of acts of racism and prejudice. In the film, the ruling corporation, Monsters, Inc., has full mastery over its workers. Additionally, the corporation intentionally trains its workers to commit stunts of horror onto the human community by labeling humans as hazardous. Consequently, the inclinations of the monsters are enough to label them as racists because of their slave-like conduct and usage of humans.