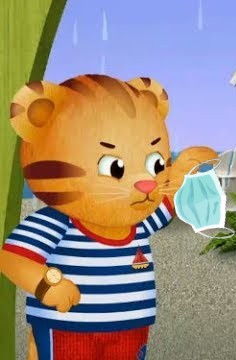 If we’ve learned anything over the past several years, it’s that celebrities are problematic beings. Last week, another Hollywood mainstay showed his true colors.

Last Tuesday, Daniel Tiger, of “Daniel Tiger’s Neighborhood” was caught on video refusing to wear a mask in a supermarket. In the video, the store’s manager very politely asked Tiger to wear a mask in accordance with store policy, which he refused to do. Tiger then accused the store manager of infringing upon his constitutional rights and called him a “f****** fascist.” Tiger then turned to the camera and explained the perils of socialism to viewers.

This jarring turn of events has left parents and children across the country baffled.

“He hosts a kids’ show. What the heck?! He’s supposed to be teaching kids to spell or whatever, not that COVID is a liberal conspiracy,” one mother told Yampage. “My kid doesn’t even know how to spell ‘liberal conspiracy!’”

“I’ve rewatched the whole show and Daniel doesn’t take any sort of political stances in any other episode. Not even in ‘Daniel Goes to Washington D.C. on January 6, 2021,’” one elementary school student stated.

“My mom won’t let me watch ‘Daniel Tiger’ any more,” one five-year-old reported. “I told her that cancel culture has gone too far and that you have to separate the art from the artist.”

As of this writing, PBS Kids has refused to comment on Tiger’s behavior and Daniel Tiger has expressed no intention of apologizing. Tiger’s co-star Katerina Kittycat has withdrawn from the sixth season of the television program.

Johnny A. Mcfree - December 8, 2020 0
At the moment, there’s no real estimate as to just how much the mine owner is making, but what is known is that he is making a lot of profit off of this little scheme.