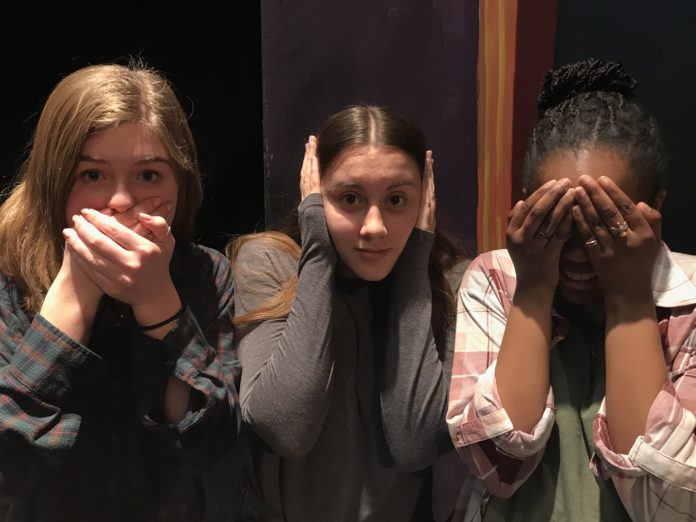 Next week, J-D will put on one of Broadway’s most famous musicals, Guys and Dolls. The show follows two gamblers. Nathan Detroit, who is desperately trying to find a venue for a crap game, needs money to be able to afford a gambling spot. He bets Sky Masterson that Sky cannot get a leader of the Save-A-Soul Mission to go on a date with him, and hilarity ensues.

The cast has been hard at work in rehearsals, the pit has been hard at work rehearsing their music, and the stage crew has been hard at work talking in the wings. Although their efforts took time and dedication, the school administration decided there must be some changes made to the famous show: it just wasn’t school appropriate enough. Some have heard about the slip-up involving the set: the infamous “CASINO” sign, as quickly as it appeared, turned into a “CINEMA” sign just days after its construction. Since then, J-D has diligently kept tabs on the production, constantly on the watch for any other sinful actions.

On January 29th, In the middle of rehearsing the number “Luck Be a Lady”, (in which the crapshooters do some gambling and dancing), cast members found themselves surrounded by members of the school board.

“The whole show is about gambling,” shouted infuriated cast member Kyra McDevitt from the stage.

“Gambling? I didn’t know this show was about gambling,” whispered Petrosillo to a colleague. “Gambling aside, cursing is prohibited on school grounds,” she called back to the cast.

Guys and Dolls has been altered accordingly. The crapshooters are now “darnchuters”, novice basketball players who are mentored by the principal gamblers coaches. All of the characters are already pure of heart and soul, yet the Save-A-Soul Mission keeps its place in the show in case audience members are not.

Many changes have been made to the show, but surprisingly, none of the 1950s-era misogyny of the Broadway show has been cut. “The Hot Box”, a rather racy nightclub at which principal Adelaide performs with her “Hot Box Girls”, has been granted permission to stay in the show, as well as all catcalling and nonconsensual kissing that occur.

“We figured we had to keep some elements of the plot, otherwise, the show really wouldn’t make any sense,” said Petrosillo.

For opening night, it is rumored that the school’s Steering Committee is planning to literally force themselves on stage to steer the metaphorical boat in the show’s 11 o’clock number “Sit Down, You’re Rockin The Boat”, as to prevent any turmoil from ensuing involving this nonexistent boat that has the potential to be rocked.

Digby Thanoscar - June 17, 2019 0
I don’t really know… nothing can replace my love for lemonade. Yes, I could go to the store and buy some lemonade like a plebian. Or, I could enjoy a nice, cold, refreshing glass of fresh squeezed lemonade. But your question was how did I cope?