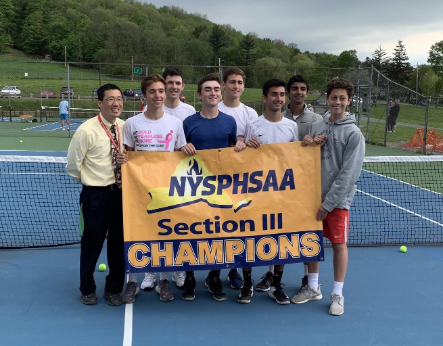 “Players won their seeds in the first singles and first doubles draws.”

Maintaining a multi-year undefeated record in the league, all seven qualifying players (3 singles, 2 doubles this year) were sent to the Class B tournament last week with seeds and first round byes. Luckily, it was a beautiful in Utica for both days, resulting in many a sunburns and well fought victories.

Ultimately, players won their seeds in the first singles and first doubles draws. However, needing to populate the State Qualifier tournament, players who lost their draw in higher positions still advance. As such, JD Tennis will continue to have a large presence in the postseason.

“Advancing, the team has sent 4 players to that tournament taking place this week.”

Advancing, the team has sent 4 players to that tournament taking place this week, including Mark Bratslavsky, Peter Hatton, Essex Glowaki and Dhruv Nanavati. With starters Hatton, Nanavati and Glowaki having made states previously, hopes are high going in. Be sure to stay tuned for updates as the players advance.