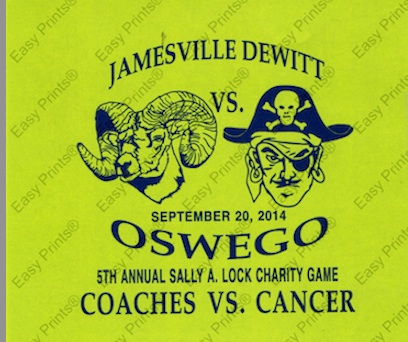 Both the J-DHS JV and Varsity Boys Soccer teams will be participating in this year’s Coaches vs. Cancer event against the OHS boys soccer teams. Mr. Krause started this annual charity game in 2010, when his sister, Sally A. Lock, was diagnosed with ovarian cancer. “Now, we play in memory of my sister, as a tradition to support the American Cancer Society and their progression towards finding the cure to cancer,” said Mr. Krause. This year, American Cancer Society representative Andrea Aquino will come to accept the check between the JV and varsity games.

Each year, in order to raise money for donation, the boys soccer teams from both competing high schools sell T-shirts around their schools and communities. Nearly 60 percent of the earned money will go towards the American Cancer Society. Mr. Krause said that the boys did a great job this year and he is proud of the effort and care they put into this event. “With a little under 400 t-shirts sold, I believe this year is a record number,” said Mr. Krause. He said they are hoping that everyone who bought a ticket or T-shirt will come out and support the boys during the game.

The Silver Knights, a local semi-professional soccer team, will be sponsoring the Coaches vs. Cancer soccer game once again this year. “They are coming to the game to hand out candy and raffle off tickets. The winner of the raffle will win an autographed game ball and jersey, along with four complimentary tickets to Silver Knights game,” said Mr. Krause. “You have got to be at the game to get them,” he added.

Students around J-DHS seem to be very supportive of the annual even. “Mr. Krauss should be proud of himself, not only for starting this tradition, but for continuing it. I am sure his sister would be,” said Senior Fiona Puccio. Senior Karola Castenada said that it is a great cause and that she is really amazed that people are organizing something like this around JD. “It’s a good way to raise money, and it allows the students become involved with the search for the cure to cancer,” said junior Luke Tarnow-Bulatowicz.

”And now we are just crossing our fingers for good weather,” said Mr. Krause.

Model United Nations Stands Out At Their Latest Competition