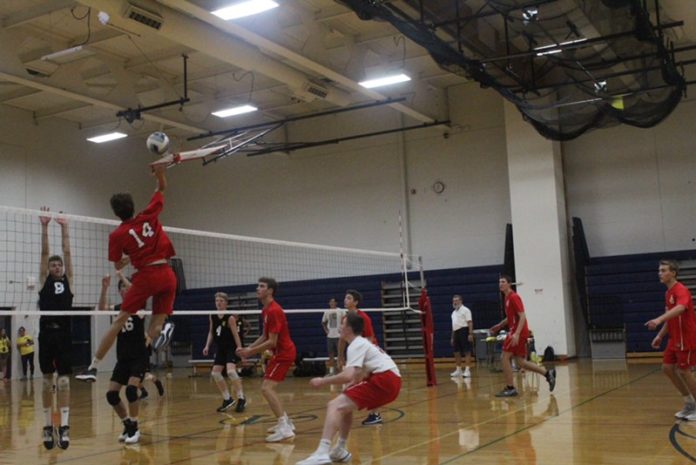 By Bess Murad and Sophia Ferlenda

Coach Krause started this annual fundraiser in 2010 to raise money and awareness for cancer. This was the year his sister was diagnosed with ovarian cancer for the second time in four years. While visting his sister while she was being treated at Roswell Park in Buffalo, Coach Krause decided he “needed to do something,” and with that,  the annual charity game began. That first year of the charity game raised $2,400.

As in the past, the event consisted of a JV and varsity soccer game with a check presentation between the two games. During the check presentation, the American Cancer Society representative, Andrea Aquino, recieved the check. This is Coach Krause’s favorite part of the event because he likes to give credit to all the players for all the hard work they did to fundraise.

Every year since the event started, Coach Krause has designed a new t-shirt for the event. The JV and varsity teams from both schools that are participating in the game are encouraged to sell the shirts to their family and friends. The shirts are $10, and this year, they were fluorescent yellow with both team’s mascots, a ram and a pirate, along with the names of the two teams and the date of the event.

This year both the Oswego and J-DHS soccer teams sold over 400 shirts, which is a record. Senior Bob Wason, a defender, sold 25 shirts, the most shirts on the J-DHS Varsity Boys team. At the game this year they had a raffle for a basket that had items including Syracuse Silver Knights soccer tickets, a soccer ball and other Silver Knights apparel.

The boys on the team are honored to be part of this event. “We are making a difference in the world, even with a small thing,” said sophomore Andrew Barclay, a defender on the J-DHS Varsity Team. “Every dollar given to this research could be a reason for a cure,” said Barclay.  “It supports cancer research and it supports our very kind and courageous coach, Mr. Krause,” said junior Dean Kousmanidis, a center midfielder on the Varsity Boys team.

Following the game the J-DHS JV and Varsity soccer teams had a pasta party in the large cafeteria to celebrate the success of the fundraiser.

“Krause ran a great cancer event this year. It was a great game and I think both teams had a great time.” said Kousmanidis. Coach Krause plans on continuing this tradition until he retires and hopes to find other ways to raise money for the American Cancer Society.

The Opening Week of the NBA Season

Success Right From the Starting Block