RamPage
Home YamPage Chocolate and Flowers Out, Frogs In 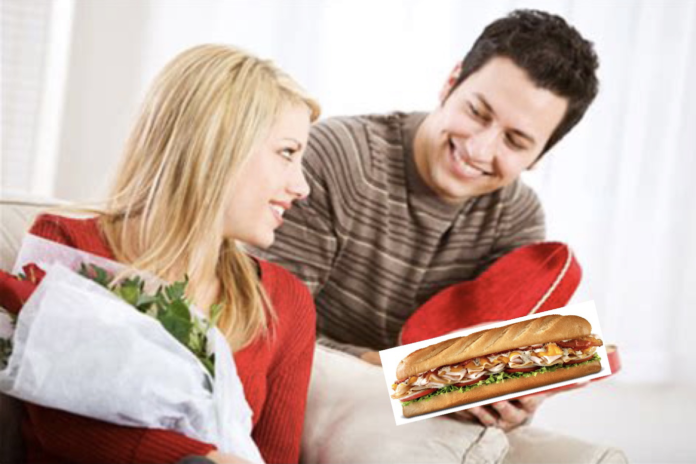 Love is cliche. We all know that. It’s boring. It’s dumb. And it’s been done before. But after conducting an anonymous survey, I’ve come up with the best possible list of the most unique Valentine’s Day gifts to give to your significant other, or that person that won’t stop rejecting you and you hope that a gift will win them over.  Here are a few things that say, “Take me back please, I beg of you. I’m so desperate,” without actually saying it.

Love is for cliches, but roast beef sandwiches are in the air. Can you smell it? What says “I love you” like a sandwich full of warm slabs of meat and other animal remnants? According to an anonymous respondent, nothing. In the comments of our survey, they included the following message to share: “After my girlfriend dumped me on the fourth day of Hanukkah for accidentally setting her dining room on fire with a Hanukkah candle, I knew I needed to give her something grand. I spent at least ten minutes slaving away in my kitchen making a roast beef sandwich from slightly expired bread and wilted lettuce. The second she saw my gesture, she took me back and now we’re as happy as ever.”

Another anonymous respondent gives the idea of knitting a sweater, but not for your special someone, rather for their iguana. With the weather getting chillier by the day, the last thing you want is to see someone you love suffering from sadness over the cries of their iguana, Robert, freezing in the cold. An extra tip would be to knit the sweater with its own dead skin! They’ll feel like themselves in their own skin-made sweater, and to add extra color, you can even dye the skin with day-old beet juice! What person wouldn’t love to see their dearest iguana in a beautiful, hand-knitted, red sweater?

Purchase Them an Exotic Pet

Now this one may seem a bit more on the boring side, but one of our anonymous respondents was confident this would have the person on the receiving end in awe. A few examples of exotic pets to buy include, but are not limited to, an anteater, a tarantula, a kangaroo, an alpaca, a full-sized boa snake, a sugar glider (cousin to the squirrel), and even a two-toed sloth! To find out what exotic pets are legal in a state near you, click here. Finally, a comment from our respondent: “I thought buying my crush a frog would’ve been enough for them to finally love me, but instead I now have a restraining order against me. I just knew I should’ve chosen a cooler pet. What do you do with a frog anyway?” Oh, I couldn’t agree more.

What’s something that you do every day? Well, let’s not get crazy. What’s something you do at least once a week? Shower, obviously! And what’s the first thing you see when you get out of the shower, other than the ogre in the mirror? Your bath mat! So why not make that special someone something that will always remind them of you? Life coaches all around the globe say that in order for a relationship to work, you can’t have one person walking all over the other constantly. It’s just not healthy. But they didn’t say anything about not wiping your feet on a portrait of the one you don’t want to commit hate crimes against, the one you’re in a relationship with. An anonymous respondent tells us how they felt like they were being walked all over, and that their loved one would only ever communicate with them when they needed an alibi for the police, or wanted Chick-Fil-A. So for Christmas, they gave them a bath mat of their face in hopes that they would walk all over them in their bathroom, rather than in real life. And for a limited time only, you can get a custom shower curtain free with any bath mat purchase, so get them soon. Did this respondent’s story inspire you? If so, get your bath mat here.

Now, this may seem unthoughtful, and it is, but it’s guaranteed to put a smile on the face of anyone you give it to, except for when they put it to use. They won’t be smiling then. Anyway, this respondent was so confident in her idea that she didn’t want to remain anonymous. The respondent, Mila Morgan, decided she wanted the world to hear her story in confidence: “There was a guy who rejected me a multitude of times and loves playing hard to get. His birthday was coming up and I remembered something he had told me. He had said that I should stop trying, that I was useless and he wished I was a plunger so he could drown me in a toilet, so I made his wishes come true! When I disappeared and gave him a plunger, the look on his face was ecstatic.” I guarantee that anyone you give a plunger to will be grateful to you for eternity. What a wonderful and useful suggestion.

Last, but not least, we have a deadly loveable gift from our final anonymous respondent! This next-level romantic gift lets your valentine know that you’re thinking of their future. It’s always good to be prepared after all. You could even make matching ones to guarantee you spend eternity together. How romantic. Here’s what the respondent had to say: “My significant other and I are madly in love, so in love that last week they bailed me out of jail for reasons that will stay unnamed. Anyway, I just know that they’re my forever person and I really want to show them that by letting them know I see a future with them and that I want to prepare early. I’ve started building it in hopes it will be finished by February 14.” What a beautiful story, I must say. If you love this idea and you’re not as savvy as this respondent, you can buy a custom casket kit on handy Amazon.

I hope after reading these inspiring stories you found your very own unique Valentine’s Day gift to give to that special, or not so special, someone in your life. This year shall be the year we call cliche and unthoughtful gifts quits and really give something meaningful and well thought out.

“All I Want for Christmas is You” to be Played on...

Digby Thanoscar - November 11, 2020 0
While this certainly isn’t textbook and may not even be legal, we can’t say he’s wrong. I myself have forgotten all about not understanding sig figs and have just accepted that my soul has been sold to Mariah Carey.