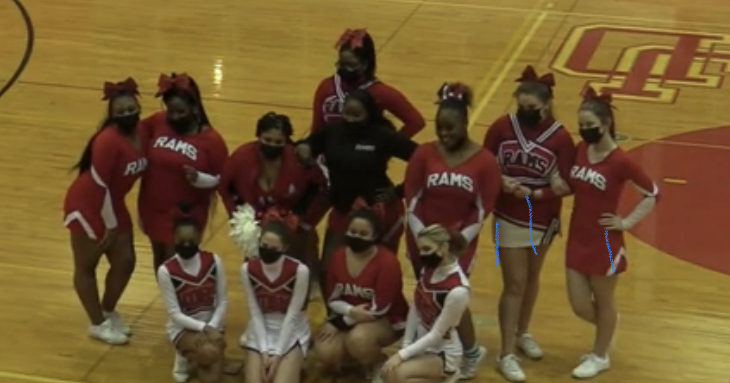 That is what Jamesville-DeWitt cheerleading coach Alanna Jones told her team before the season began.

“We can, we will, and must get through anything that life throws at us, and we will do it together!”

Although safety precautions have meant that some of the most extravagant stunts can’t happen, it’s still impressive to watch all the meticulously planned routines.

Another difficulty of this season has been having to perform with no fans. Usually, this means that the cheerleaders are the only people cheering on the team. It can be difficult to have such high energy, but Coach Jones has been impressed so far.

“I was a little nervous about the energy level of the girls without fans in the gym. However, each game they have ceased to amaze me with their energy levels. The girls have really stepped it up this season when it comes to keeping the team energized!”

Possibly the most important aspect of cheerleading season being able to happen is what it provides to everyone on the team.

“This program is so much more than pom-poms, sidelines, stunts, and competitions. This program is a place where people can come and be a part of a family. A place where they can come on their worst days and forget about all the things that life throws at them!”

You can watch the cheerleaders at the boys basketball game this Saturday, March 13th at 1 p.m.