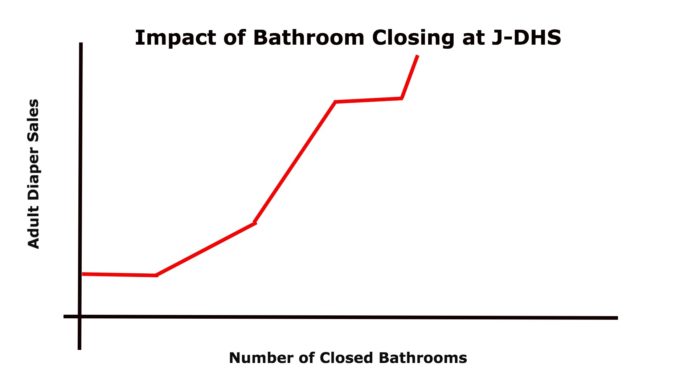 The TikTok trend which has rattled school administrations and school bathrooms across the country has led many to question, well, everything. What could possibly be the value of soap dispensers? Why are teenagers willingly choosing to spend extra time in foul-smelling school bathrooms? And, most importantly, where are students supposed to go to the bathroom now that over 98.2% of the bathrooms are closed? This last question has caused many students and staff to take drastic measures just to perform their basic bodily functions.

One measure taken by students has been the utilization of adult diapers. This has caused huge economic effects, with the sales of adult diapers rising exponentially. Since high schoolers have to go to the bathroom an estimated 2.7 times a day, the thought of simply holding it until students get home is frankly implausible. Because of this, adult diapers are completely out of stock at both Walmart and Target, and the fabric underwear business has taken a costly hit. However, it is unlikely that the latter will ever regain this loss since, as one sophomore put it, “I can never go back to regular underwear, not in a million years. Diapers are just too convenient and stylish.”

Another solution to the bathroom problem had been the re-implementation of chamber pots. Yes, the devices that were used pre-plumbing for nighttime bathroom breaks. Many classrooms have started dedicating one desk (usually in the back corner of the classroom, if lucky, by a window) as the home of their chamber pot. It has become common courtesy for students to avert their eyes from this particular location whenever one of their peers is using it. In classrooms that are lucky enough to have windows, students simply discard the chamber pot’s contents out of the window. However, classrooms without windows are facing bigger difficulties. Mr. Phillips, who works in windowless room G18, told Yampage, “I initially tried the whole chamber pot thing, but without a dumping window—and Mrs. Panek made sure I knew that the library would not be a thoroughfare—I just have to tell my students to go outside. I mean, that’s the natural way, right?”

The good old-fashioned “using a bush” has also been taken up by P.E. teachers. As a cardio exercise, many of the teachers are having students run around the high school campus searching for the best bush. This, of course, has caused some problems (and trauma) as often the routes involve going under windows. But one P.E. teacher described that as a necessary “character-building experience.”

Yampage will keep you updated as the bathrooms, hopefully, re-open, and if not, as the best bush is outfitted with the classiest of Italian tile.

Aveline Chocolat - February 24, 2021 0
While most vaccines take several years to be developed and have to undergo many phases of testing and approval, however, this intrepid group of senior scientists has developed a vaccine in under a month.