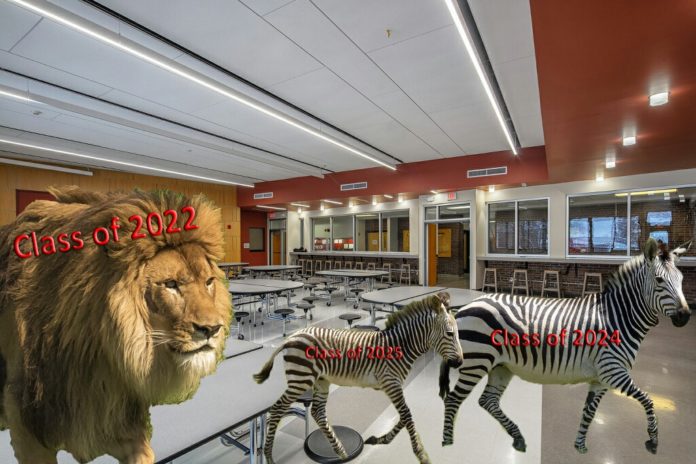 J-DHS students have come to an almost primitive state after the closing of the main gym foyer eating area has forced many upperclassmen to migrate back to the large and small cafeterias — eating areas which have been claimed and inhabited by underclassmen since the beginning of the school year. The ecology unit has come to life to the horror of everyone, except biology teachers, of course.

“I’ve tried not to get involved in this whole thing since everyone seems to be going completely crazy, fighting over tables and stuff. Yesterday, I saw a junior angrily throw an open go-gurt across the small cafeteria after a freshman — who was already being forced to sit on the floor — wouldn’t take his trash to the trash can for him, ” sophomore Thomas Vander Molen said. “But I can’t look away. Everything is right out of my ecology notes. When we were studying it, I had no idea what any of the predator-prey strategies were, but look at that. It’s literally a group response. And that’s batesian mimicry over there.”

To the normal student who totally paid attention through all of biology class, group response is when animals move in packs in order to confuse predators (think of zebras), seen here as a group of freshmen encircles one of their friends in an attempt to hide her from an angry senior who, apparently, had claimed the unfortunate freshman’s seat back in what-felt-like-a-decade-ago pre-pandemic tenth grade. However, after not being able to recognize the culprit, he instead just spoiled the end of Euphoria which scared them off. And batesian mimicry (not to be mixed up with mullerian mimicry) is a disguise mechanism in which non-dangerous species take traits like that of a dangerous species in order to scare off predators. In this case it’s in play as a sophomore casually asks, “That APUSH discussion was so awful, am I right?” in an attempt to slide in next to a group of especially scary-looking juniors after being chased by a group of especially angry-looking seniors. However, when the juniors noticed that said sophomore wasn’t carrying an AP Lang textbook, his disguise was blown and they violently threw their textbooks at him, knocking him backpack-first onto the cafeteria floor.

But with many freshmen having not taken biology yet, they can only hope to perform one of these predator-prey strategies accidentally, and that’s very rare. Competition is fierce and the pyramid of power and rank is shifting. There are only so many tables in the cafeterias and only so many upperclassmen who are willing to be kind to the underclassmen. “Being in separate cafeterias this year has definitely limited the amount of… upperclassmen to underclassmen lessons being handed out, if you know what I mean. I think it’s about time these freshmen and sophomores truly realize the authority we have in this school,” senior Max Oppedisano said, before walking over to a group of freshmen with his messy calculus notes, giving them quite a scare.

“I’ve sat up here all year and it’s been very interesting to watch the juniors and seniors come back. The whole cafeteria environment has completely evolved,” junior who passed the Biology Regents Anka Chiorini told YamPage. “Last year, we were definitely dealing with primary succession; the cafeterias were maybe half full. Then, when it was just the underclassmen, it felt kinda like secondary succession, definitely more populated. And now that the upperclassmen are returning, the average height is increasing, people are having to sit much closer together — we’re slowly evolving into a climax community. We don’t need to demolish the high school to see ecological succession; it’s happening right here in the cafeterias! And, oh my gosh. Do you see that?” A junior had somehow set up a whole line of lit bunsen burners around a cafeteria table to keep the underclassmen away.

Luckily, students are so focused on securing their own niche in the new environment and the administration is too focused on how this simulation is going to improve Regents and AP scores that the increased COVID-19 risk caused by cramming more maskless individuals into a smaller space has largely gone unnoticed.