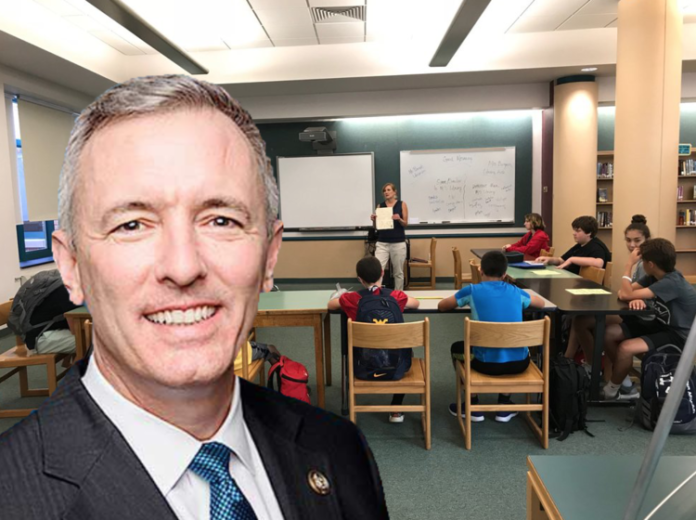 Dewitt, NY– The JDHS library has always been kept under secure control by staff members. One rule created last year that required students to get signed passes to use the library after school faced backlash from many students, deeming this rule as inconvenient and unnecessary.

Over the summer, students inevitably forgot about this rule. When the school year started again, students began, as Mr. Phillips described it, “swarming the library in terrifying masses of up to five kids at a time. It was horrible!”

“One time we had twenty five kids in the library, at once, for an entire activity period,” gasped Ms. Panek while breathing into a paper bag. To fix this devastating loss of control, the librarians decided they had only one option- bring in reinforcement.

Soon enough, the librarians had implemented a new rule: to obtain access to the library at any time during the school day, students must present a pass signed and approved by congressman John Katko. Each signed pass is good for one forty-minute period in the library within twenty-four hours of obtaining the signature.

“Passes signed by visiting assistant professor Dana Balter will not be accepted,” said Katko in his latest press conference. This controversial stance has caused many lifelong Katko supporters to question his platform.

Students have taken their disagreement with this rule to the next level. Fully fledged protests have broken out in the hallways during passing periods.

“When I booked the hallways for protest, the only available times were during the fourth period lunch bell, and the time between first and second period every other C-day,” says an anonymous student activist. “As you can see, it has been a challenge for us to get the message across.”

The librarians have taken extensive measures to make sure nobody forges signatures. “We have locked the door with a magic spell we learned in librarian school,” says Mrs. Panek. “Students simply slide their pass through the door and if the spell detects a forgery, their hair will be burned off and the word “trespasser” will appear on their head in bright red ink.”

Library attendance is down by almost 100%. According to statistics, nowadays, one student uses the library per week. It’s a shocking and extreme decline from the normal average of 5.

As of now, the librarians show no sign of mercy. Protests are continuing as the literary climate intensifies.

Aveline Chocolat - April 26, 2022 0
“It’s so great to let my beard follicles breathe for once,” Samuel Phillips (‘22) stated, stroking a bizarrely long patch of hair sort of near his chin.