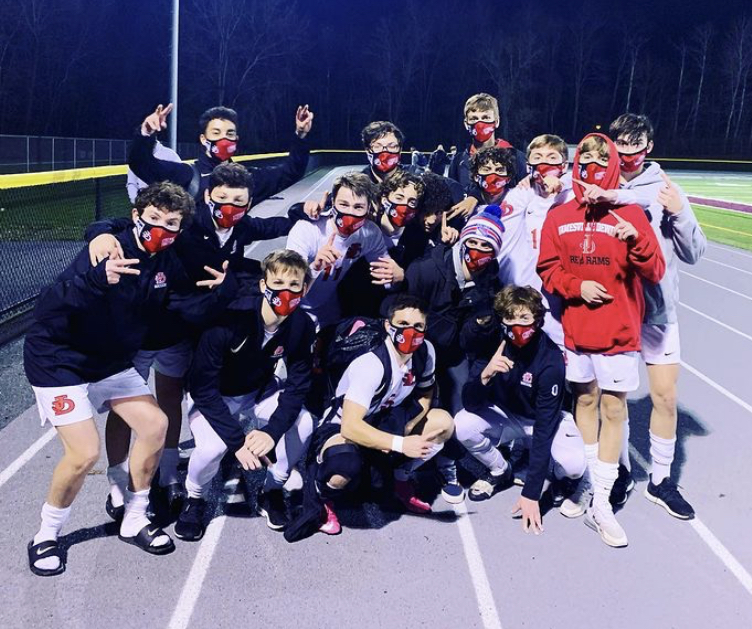 Entering the 2020 season, the Jamesville-DeWitt Boys Soccer team was coming off of a Cinderella run to the state semifinals in 2019. The expectations were high for the Red Rams, and as the season has now come to a close and awards have been handed out, it is clear that they met them.

With a 6-0 league record, J-D became the SCAC Empire League Champions. Their season included impressive wins over ESM and a non-league matchup with CBA. Although COVID-19 meant that there wasn’t a chance for the Red Rams to repeat as section champions, they still were able to take home at least one title.

Many Jamesville-DeWitt players also earned individual honors this year. Senior and captain Johnny Keib was named Co-Player of the Year, five players were named to the all-division first team, and four more were named to the second team.

Keib, a defender, was excited and surprised to learn about his award. “No, I did not expect to win. Defenders normally don’t get any love so I was a bit shocked. It also came out of the blue too. I wasn’t aware that there was even going to be any awards this season. So I guess overall I wasn’t really expecting it.”

Dovciak, a captain, helped lead the defense along with Keib. Both noted how they were able to rely on each other to be good players and good leaders. “My center back and captain partnership with Johnny led to a very cohesive and successful back line,” said Dovciak.

Brazell led the team in points, scoring five goals and three assists. Scott scored once and helped facilitate the ball through the middle of the field. Allen made 48 saves throughout the season, and posted five shutouts. All three of these players will be back next year with even higher expectations. “I expect big things next year,” said Scott. “This group has been dreaming to win a state championship and that’s the goal next year.”

With nine J-D players being honored, it is clear that the success of the season was a team effort. Sabatino put it best: “Each guy did their part to ensure our success as a team.”