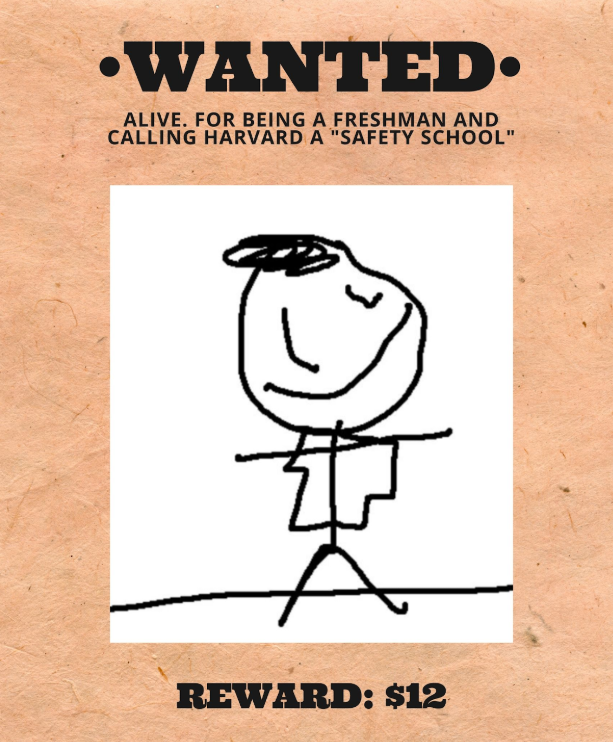 This year, college fever has been hitting Jamesville DeWitt’s seniors as hard as the cutting edge cinematography of Screenagers did in 2016 (only 2002 kids can relate). They have become, “nervous, depressed, and sleep deprived shells of what a teenager is supposed to be” as described by junior Emily Ninestein. You can often find seniors running to and from the counseling center in a panic, furiously refreshing their emails, and standing completely still in the middle of the hallway staring into oblivion. Clearly, this hasn’t been the “best year of high school” that they were promised.

Because of this, nothing is more infuriating to 12th graders than when a freshman decides they want to talk about college too. Not only should the 9th graders shut up until May 1st, but they should also shut up until May 1st. This week, all senior members of the National Honors Society have announced they will be putting out a bounty on the freshman who was overheard calling Harvard their “safety school.” They will pay whoever brings them the culprit with money they raised from their recent pasta sale; a whopping $12.

“They’re in for a rude awakening,” says senior Gigi Lecomte as she aggressively knocks back an espresso shot. “I mean really? How DUMB do you have to be to think Harvard is a safety school? They don’t even know what’s coming! They don’t even know.” Unfortunately our interview with Ms. Lecomte was cut short, as she had to go write supplements about traumatic events that never happened to her.

Since the bounty was announced, there have been very few souls brave enough to answer the call. Most sophomores are too busy aggressively studying mongolian empire vocab and the steps of mitosis to go “freshman-hunting.” Nobody has even heard from the junior class in weeks. It seems they are all working on reading the 7,000pg biography of former city hall janitor, Bob, for their APUSH book assignment. Of course, the seniors are completely occupied with having mental breakdowns and complaining about Economics, which is way more work than it should be. Otherwise, they would find the tyrant themselves.

As it turns out, the only people that seem to have free time on their hands are the freshmen. In a survey with 50 random freshmen, 75% of them said they were partaking in this hunt. This has consequently led to a breakout of fights in earth science lab classes. It appears the freshmen have gotten confused and started to attack each other. As a result, rocks have been confiscated from all ninth graders until further notice. Mr. Keenan declined to comment on how this is going to impact the course itself, as 90% of Earth science curriculum revolves around rocks.

Whoever is able to catch this freshman should bring them to the next NHS meeting, where they will be publically lectured for 45 minutes. The freshman was described to be wearing skinny jeans, a shirt that says “allergic to mondays” and, “the attitude of someone who got a 1600 on the SAT.” We will try our best to provide updates as this situation continues to unfold.

Ps. Harvard is NOT a safety school. It just isn’t!!

Aveline Chocolat - November 18, 2020 0
“I posted about how much the documentary freaked me out on my Twitter and I got 20 likes!” Kai Brutsaert reported. The aforementioned post read: “So scared about the apocalypse or the end of civilization or whatever :( #socialdilemma #socialmediaisruiningourlives #tgif.”